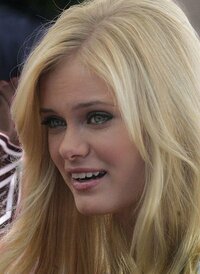 Sara Paxton (born April 25, 1988) is an American actress, model and singer. She grew up in California and began acting at an early age, appearing in many minor roles in both films and television shows, before coming to wider renown in 2004, after playing the title role in the series Darcy's Wild Life and Sarah Borden in Summerland.

Paxton has said that singing and acting “went hand in hand” during her early years, though she initially began working as an actress, appearing in musical theater and later in television commercials at a young age. Her first film role was a small part in the 1997 Jim Carrey comedy, Liar Liar. During the late 1990s and early 2000s, she appeared in a number of minor television and film roles, including a part on the soap opera Passions, regular roles on the series Greetings from Tucson and Action, and a guest starring role on the Disney Channel show, Lizzie McGuire starring Hilary Duff playing an ex-president of Lizzie's school. In 2003, Paxton starred in R. L. Stine's Haunted Lighthouse, a short 3-D film attraction that still plays at several theme parks across the United States. She also appeared as Lana on CSI: Miami.

Paxton's first major role was in the teen-oriented film Sleepover, which opened in July 2004 to negative reviews and low box office revenue; during the same summer season, she appeared in several episodes of the series, Summerland, playing Sarah Borden, a mentally troubled teen who experimented with drugs and sex with Jesse McCartney's character. Paxton was subsequently cast in the lead role of the Discovery Kids television series, Darcy's Wild Life, playing Darcy Fields, a girl who works at a rural veterinary; the series was filmed on a farm in Toronto and aired from 2004 to 2006, often featuring Paxton's music track, “Take a Walk”. Paxton received an Emmy nomination for the role in 2006.

In 2005, Paxton spent three months working on the Australia-filmed Aquamarine, in which she played a mermaid, opposite Emma Roberts and JoJo, whom she befriended while filming. Paxton has said that she felt a sense of “female empowerment” while on set because “almost everyone” on set was female. The film opened on March 3, 2006 and grossed approximately $7.5 million in its opening weekend. Reviewers of the film compared Paxton, whose inspiration is Goldie Hawn, to actress Reese Witherspoon, saying that she has an “infectious, nutty energy.” Paxton recorded a song for the film's soundtrack titled “Connected”, an English version of the Mexican group RBD's song Tenerte y Quererte from their 2004 album Rebelde, which has been used in Barbie and the Diamond Castle and covered by Katharine McPhee.

Paxton hosted The Secret Life of Water, the first episode of the series Planet H2O, which premiered in April 2006 on public television stations. In May of the same year, she made an appearance on the television series Pepper Dennis, playing a teen actress. Paxton, who sees herself as an “evolving actress,” then appeared in Return to Halloweentown, replacing Kimberly J. Brown in the fourth installment in Disney Channel's Halloweentown series; she dyed her hair brown for the role. The film aired on October 20, 2006. During the summer and early fall of 2006, Paxton filmed The Party Never Stops: Diary of a Binge Drinker, a Lifetime Television film, in Vancouver Island. In the film, she plays Jessie, a college student who falls victim to binge drinking. Paxton has described it as “very different” from her previous roles, and has specified that she was looking for a role that would be a “challenge”. The film aired in March 2007. Paxton's next film role was in Sydney White, a college-set comedy starring Amanda Bynes and Matt Long; filming began on February 12, 2007 in Orlando, Florida and the movie was released on September 21, 2007. She next starred in Superhero Movie, a parody on superhero films which began filming in September 2007 and was released on March 28, 2008. She also helped co-star Drake Bell record his theme song for the movie, Superhero! Song.

Paxton starred in the remake of The Last House on the Left, playing the lead female character, Mari. The film opened March 13, 2009. Her next film may be Gravy, a horror-comedy with Jena Malone and Winona Ryder, and she will also guest star on the show Jonas.

Paxton starred in the CW drama series The Beautiful Life alongside Corbin Bleu, Mischa Barton and Elle Macpherson. The show premiered on September 16, 2009, but was cancelled after 2 episodes. It was later aired online on YouTube. Paxton will next co-star with Scott Eastwood in the thriller Enter Nowhere, and will also play one of the lead roles in the Ti West film The Innkeepers.