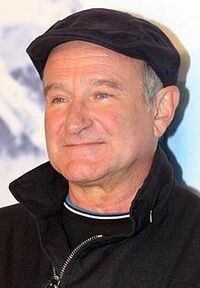 Robin McLaurim Williams (born July 21, 1951) is an American actor and comedian. Rising to fame with his role as the alien Mork in the TV series Mork and Mindy, and later stand-up comedy work, Williams has performed in many feature films since 1980.

Most of Williams' acting career has been in film, although he has given some performances on stage as well (notably as Estragon in a production of Waiting for Godot with Steve Martin). His performance in Good Morning, Vietnam (1987) got Williams nominated for an Academy Award. Many of his roles have been comedies tinged with pathos.

His role as the Genie in the animated film Aladdin (1992) was instrumental in establishing the importance of star power in voice actor casting. Williams also used his voice talents in Fern Gully, as the holographic Dr. Know in the 2001 feature A.I. Artificial Intelligence, the 2005 animated feature Robots, the 2006 Academy Award winning Happy Feet, and an uncredited vocal performance in 2006's Everyone's Hero. Furthermore, he was the voice of The Timekeeper, a former attraction at the Walt Disney World Resort about a time-traveling robot who encounters Jules Verne and brings him to the future.

In 1998, he won an Oscar as Best Supporting Actor for his role as a psychologist in Good Will Hunting. However, by the early 2000s, he was thought by some to be typecast in films such as Patch Adams (1998) and Bicentennial Man (1999) that critics complained were excessively maudlin.

Williams has also starred in dramatic films, which earned him two subsequent Academy Award nominations: First for playing an English teacher in Dead Poets Society (1989), and later for playing a troubled homeless man in The Fisher King (1991);17 that same year, he played an adult Peter Pan in the movie Hook. Other acclaimed dramatic films include Awakenings (1990) and What Dreams May Come (1998). In the 2002 dramatic thriller Insomnia, Williams portrays a writer/killer on the run from a sleep-deprived Los Angeles policeman (played by Al Pacino) in rural Alaska. And also in 2002, in the psychological thriller One Hour Photo, Williams played an emotionally disturbed photo development technician who becomes obsessed with a family for whom he has developed pictures for a long time. In 2006 Williams starred in The Night Listener, a thriller about a radio show host who realizes he has developed a friendship with a child who may or may not exist.

He is known for his improvisational skills and impersonations. His performances frequently involve impromptu humor designed and delivered in rapid-fire succession while on stage. According to the Aladdin DVD commentary, most of his dialogue as the Genie was improvised.

In 2006, he starred in five movies including Man of the Year and was the Surprise Guest at the 2006 Nickelodeon Kids' Choice Awards. He appeared on an episode of Extreme Makeover: Home Edition that aired on January 30, 2006.

At one point, he was in the running to play the Riddler in Batman Forever until director Tim Burton dropped the project. Earlier, Williams had been a strong contender to play the Joker in Batman. He had expressed interest in assuming the role in The Dark Knight, the sequel to 2005's Batman Begins, although the part of the Joker was played by Heath Ledger, who went on to win, posthumously, the Academy Award for Best Supporting Actor.

He was portrayed by Chris Diamantopoulos in the made-for-TV biopic Behind the Camera: The Unauthorized Story of Mork & Mindy (2005), documenting the actor's arrival in Hollywood as a struggling comedian.