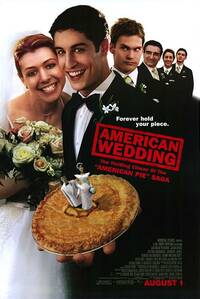 The film begins with Jim Levenstein and Michelle Flaherty having dinner, celebrating their college graduation. Jim intends to propose to Michelle, but receives a phone call from his dad, who says he forgot to give Jim the engagement ring and was on his way. As Jim tries to stall, Michelle gets the impression that he wants a public sex act, by performing oral sex on him under the table. When Mr. Levenstein (Eugene Levy) arrives, Jim tries to hide the fact that he's being fellated. Not knowing Michelle was under the table, Jim's dad expresses his excitement at the proposal. Then, after Michelle bumps her head under the table in shock at hearing about the proposal, all chaos ensues as Jim ends up exposed and has to hike his pants up quickly. Saving face, he swallows what's left of his pride and asks Michelle to marry him. She readily says yes.

As planning begins, Jim worries that the wedding will be a disaster. Michelle's parents hate him after an accidental scene in which Jim appears to be having sex with their two dogs. Michelle's wedding dress is made by only one designer working for one store, so Jim sets out to find the dress maker for her. And Jim can't dance, but salvation comes in the form of Stifler (Seann William Scott), who took dance lessons. However, Stifler only teaches Jim to dance on the condition he allow Stifler to attend the wedding (Jim and Michelle had planned to leave Stifler in the dark about the whole event, but he found out accidentally after crashing their engagement party), and that he gets to plan the bachelor party.

Michelle's sister Cadence (January Jones) attends the wedding, and Finch (Eddie Kaye Thomas) is quickly attracted to her. Sadly, so is Stifler. Upon hearing that Cadence is hoping to attract a decent guy, Stifler adopts a more meek attitude and acts like Finch, and avoids swearing and speaks of philosophy and art, mostly just quoting things Finch has said in the past. But when Finch realizes that Cadence is beginning to tire of the intellectual Stifler, Finch acts immature, rude, and perverted: in other words, like Stifler as he heard Cadence being tired of 'decent guys' while eavesdropping on Michelle and Cadence's conversation at the airport lavatory. However, Cadence begins to catch on that her two suitors are acting like each other, so the question of who she'll choose becomes more complicated. In the end however, Stifler unintentionally kills the flowers the night before the wedding, and actually feels bad about it, prompting him to bring in the football team he coaches to set up the entire room with new flowers. Cadence chooses Stifler, and Finch admits that Stifler was probably better for her anyway. Stifler, angry that he can't hate Finch after such a noble remark calls Finch a 'motherfucker'. He is quickly reminded by Finch that “Ya know, I did fuck your mom. Twice”

The film features several trademark infamous scenes like the first two films. Stifler is charged with taking care of the bride's wedding ring, but he accidentally feeds it to a dog. Waiting for the dog to defecate, Stifler retrieves the ring in a chocolate wrapper and goes to wash it, but is intercepted by Michelle's mother. Mistaking it for a truffle, Michelle's mother attempts to eat it, giving Stifler no other choice but to eat it himself to save face. Later, during the ceremony, Stifler takes a moment to quickly sniff the ring before handing it to Jim.

Michelle and Jim eventually get married. At the reception, they dance while Stifler dances with Cadence. Finch is sitting by himself when Stifler's mom (Jennifer Coolidge) arrives. They tell each other they are over each other. However, at the end of the movie it shows Stifler's mom and Finch in the tub having sex. The two men who were supposed to be watching Jim's grandma (John Cho and Justin Isfield), the ushers for the wedding, are watching in awe from the window as Finch goes under the bubbles. Stiffler also ends up accidentally having sex with Jim's grandmother when he goes to a closet to have sex with Candace and Jim's grandma is thrown in and he doesn't realize who it is.