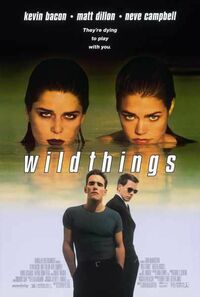 Two female students—wealthy, popular Kelly Van Ryan (Denise Richards) and goth trailer dweller Suzie Toller (Neve Campbell)—accuse Sam Lombardo (Matt Dillon), a high school guidance counselor, of rape. Sam employs a lawyer named Kenneth Bowden (Bill Murray). During the trial, Bowden causes Suzie to reveal that Mr. Lombardo did not rape her and that Kelly fabricated the charges because she was in love with him and angry he slept with her mother. The trial humiliates Van Ryan and her entire family, enabling Bowden and Lombardo to negotiate a large settlement ($8.5 million), which Sam seemingly uses to retire peacefully. In reality, it is revealed that he, Suzie and Kelly planned the entire incident in order to gain the $8.5 million. As police sergeant Ray Duquette (Kevin Bacon) becomes suspicious, Suzie becomes increasingly nervous and Sam worries that she will undermine their plan. Kelly and Suzie fight, with Kelly almost drowning Suzie, and then the two have a passionate affair in the pool. Sam and Kelly take her to the seaside, where Sam murders Suzie with a wine bottle. In the investigation into Suzie's disappearance, police find her blood and teeth by the ocean. Ray discovers that Sam is the killer and goes to Kelly's house to protect Kelly from Sam. However, Kelly remains suspicious of Ray. In the confrontation between Kelly and Ray, both are shot, Kelly fatally. Ray reports to authorities that she fired at him first, and that he was forced to shoot back in self-defense. Ray is discharged from the police force following this incident, while Sam spends time at a tropical resort. Sam goes to his room and finds Ray there — Ray and Sam had been collaborating the whole time. They later go cruising in Sam's boat in the ocean, where Sam knocks Ray overboard. When Ray climbs back onboard, Suzie — alive and now with blonde hair – appears, armed with a speargun. Ray pleads to Sam for help, to which Sam retorts, “you should not have killed Kelly”, and Suzie shoots him with the speargun, killing him, and he falls into the water. As Sam relaxes, Suzie gives him a drink laced with poison before knocking him overboard. She sails the boat back to shore by herself. A series of flashbacks explains the story. Suzie devised the plan, in which she wished to receive the money from the trial, as payback to her wealthy stepsister Sandra Van Ryan (Kelly's mother) for being scorned and abandoned by their father. Suzie also wanted to kill Ray in revenge for killing her friend, Davie, some time ago. She manipulated all the characters in the plot, making Sam seem the mastermind and faking her own death. She was underestimated because of her delinquency and poor background. Those who knew her say her IQ was around 200 and, if she put her mind to it, “she could do anything.” As for Kelly's death, Ray shot her first and then put a gun in her hand and made it appear that she had shot at him. In the final scene, Bowden meets Suzie at a tropical resort and gives her the majority of the money, minus “his usual fee”. As she walks off, he tells her to “be good”.