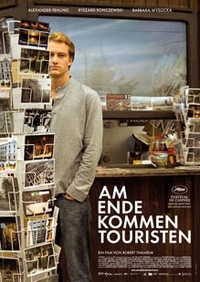 And Along Come Tourists

Sven arrives in nowadays Auschwitz to do his civil service at the memorial. He encounters unfriendliness, especially by Stanislaw Krzeminski, the 85 year old KZ-survivor, and Krzysztof Lanuszewski, brother of his early love affair Ania. Even his boss Herold, the places manager, does little to help Sven familiarize. But when problems accumulate Sven realises that he already has become involved.

Sven is an open minded young guy who didn’t choose Auschwitz for his civil service for political reasons or social engagement. Rather it just resulted like that by chance but he has no prejudices that prevent him from going. Unlike him his hosts welcome him tauntingly at the least for his being a German. But he finds Anias friendship which helps him to develop responsibility especially towards old Krzeminski whom is told to care for.

He meets difficulties when he challenges Misses Schneider from a German company which took over a polish firm nearby. When she acts disrespectfully on his protégé Krzeminski he openly criticises her and her companys policy of just using Krzeminski and their polish employees for trying to merely profit economically. But he has to learn that it doesn’t really help Krzysztof who has been fired by the company and whom Sven was hoping to help, but rather enrages Ania who doesn’t share his views.

Also he gets himself into trouble by stealing original suitcases from the places conservatory in order to make Krzeminski believe that nothing has changed. For Krzeminski tries to repair those suitcases which were stolen from the KZ-victims in order to have them sent back to their families. But tragically Krzeminski rather destroys than repairs every single suitcase. Which is why the conservators in charge don’t want him to work on the suitcases any longer. Sven decides for himself that Krzeminskis feeling to be needed and to fulfil an important task is more important than the suitcases themselves. But his boss doesn’t share his point of view when it inevitably comes out and results in a most embarrassing scene for him.

After Ania on top of that tells him to leave him for a job at the European Union in Brussels, Sven is convinced to give up his job in Auschwitz because he feels nobody wants him at this place. But when he is already on his way to the train he meets a german grade school at the station being lost on their way to the memorial. Sven makes up his mind and stays, just like that. He starts chatting with the classes teacher who tells him his appreciation for what he does at this place. Sven and we as the audience feel that he has become part of something which is bigger and more important than some privately felt problems and is rewarding for him too.