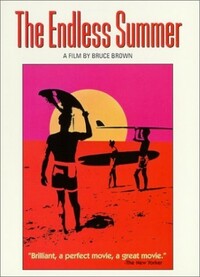 The Endless Summer, by Bruce Brown, is one of the first and most influential surf movies of all times. The film documents American surfers Mike Hynson and Robert August as they travel the world during California’s winter (which back in 1965 was off-season for surfing) in search of the perfect wave and an endless summer.

The Endless Summer is one of the first and most influential films of the surf movie genre, creating and defining an entire category of cinema which has endured and evolved for the past 40 years since its release in 1966.

The film is a documentary about american surfers who expresses the idea that if one had enough time and money it would be possible to follow the summer around the world, making it endless. They travel overseas to the southern hemisphere in order to pursue their hobby during the California off season.

Director Bruce Brown follows the surfers Mike Hynson and Robert August on a surf trip around the world. Despite the balmy climate of their native California, cold ocean currents make local beaches inhospitable during the winter. Their travel begins at the coast of Africa followed by Australia, New Zealand, Tahiti, and Hawaii in a quest for new surf spots and introduce locals to the sport. Other important surfers of the time, such as Miki Dora, Phil Edwards and Butch Van Artsdalen also appear. The narrative presentation eases from the stiff and formal documentary of the 1950s and early 1960s to a more casual and fun loving personal style filled with sly humor.

In 2002 it was added to the list of films preserved in the United States National Film Registry.

Influence on the surfer culture

When the movie was first shown, it encouraged many surfers to go abroad, giving birth to the “surf-and-travel” culture, which prizes finding “uncrowded surf”, meeting new people, and finding the perfect wave. It also introduced the sport, which had become popular outside of Hawaii and the Polynesian Islands in places like California and Australia, to a broader audience. In addition, it set the style for later surf-and-travel movies, including Momentum, (These Are) Better Days, and Thicker Than Water.

more ...
edit article
The information provided is incomplete. You can help OMDB by expanding it.