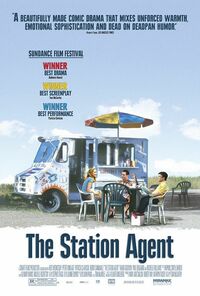 The Station Agent is an independent film about the life of a dwarf who has just inherited an old abandoned train station in the middle of nowhere. Three characters with not so perfect lives become friends during difficult and lonely times as the dwarf deals with being accepted as a normal human being. The film was surprisingly successful and received good reviews.