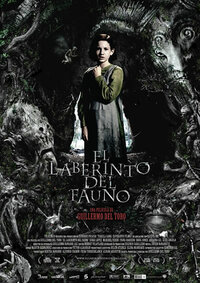 Pans Labyrinth is the exquisitely produced fantasy film from Mexican director Guillermo del Toro who is actually famous for his works in science-fiction and horror. The film stars a little girl lost in a fantasy world. The film won three Academy Awards in 2007.

Pan's Labyrinth takes place in a dual setting: Spain in May and June, 1944, during the turbulent period shortly after the Spanish Civil War, and a fantasy world experienced by a Spanish girl, Ofelia, who is given three tasks by a mysterious faun. In the “real world”, Ofelia's stepfather, the Falangist Captain Vidal, viciously hunts the Spanish Maquis, guerrillas who continue fighting the Franco regime in the region, while her pregnant mother grows increasingly ill. The “fantasy world” is one that Ofelia enters through an overgrown labyrinth garden, where she meets all manner of strange and magical creatures who become central to her story. The film employs make-up, puppetry, and CGI effects to create its creatures.

del Toro stated that he considers the story to be a parable, influenced by fairy tales, and that it addresses and continues themes related to his earlier film The Devil's Backbone,3 a spiritual sequel, though not an actual sequel. The original Spanish title refers to the mythological fauns of Greek mythology, while the English title refers specifically to the faun-like Greek god Pan (intended to help English-speakers differentiate the title from the term fawn). However, del Toro has stated that the faun in the film is not Pan.3

The film premiered at the 2006 Cannes Film Festival. It was released in the United Kingdom on November 24, 2006. In the United States and Canada, the film was given a limited release on December 29, 2006, with a nationwide release on January 19, 2007.4 Pan's Labyrinth has won numerous international awards, including three Academy Awards, the Ariel Award for Best Picture, and the 2007 Hugo Award for Best Dramatic Presentation, Long Form.