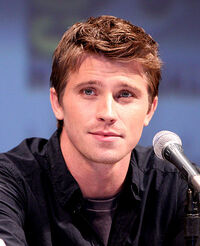 Garrett John Hedlund (born September 3, 1984) is an American actor known for his roles in the films Friday Night Lights, Four Brothers, Eragon, and for his role as Sam Flynn in the film Tron: Legacy.

Garrett made his acting debut in 2004 as Patroclus in Troy. The film, which starred Brad Pitt, was released May 14, 2004, to mixed reviews, but debuted #1 at the U.S. box office and went on to gross over US$487 million worldwide. He also starred as Don Billingsley in the 2004 drama Friday Night Lights.

He starred as Jack Mercer alongside Mark Wahlberg in the action/crime film Four Brothers. The film, which received mixed reviews, was a box office success earning $92 million worldwide. He next appeared in the film Eragon in a supporting role as Murtagh. The film, which was released December 13, 2006, and was a box office success, earned $249 million worldwide. The film received mostly mixed reviews with an approval rating of 52%. In 2007, he starred in the Garry Marshall-directed comedy-drama Georgia Rule, alongside Lindsay Lohan and Jane Fonda. The film, which was released May 11, 2007 was negatively received by critics and failed to surpass box office expectations, only making a lifetime gross of $41 million. He also starred in another film called Death Sentence.

In 2009, he was rumored to appear in the independent film Hectic as Louis.

He is playing the role of Dean Moriarty in On the Road in Montreal and various other locations in Canada. Additional scenes were shot in Argentina, Mexico and the United States. The film is scheduled to be released in 2011.