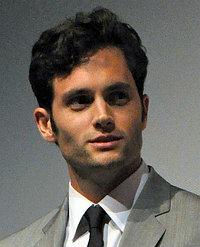 Penn Dayton Badgley (born November 1, 1986) is an American actor. He is best known for his role as Dan Humphrey on the CW television series Gossip Girl. He has also starred in the movies John Tucker Must Die, The Stepfather and Easy A.

Badgley’s first notice came with his role as Phillip Chancellor IV on the soap opera The Young and the Restless (2000–2001). He was nominated for a 2001 Young Artist Award for Best Performance in a Daytime Series for his work.

In 2002, he starred in the WB half-hour series Do Over. Badgley starred as Joel Larsen, a 34-year-old man who gets a second chance to get his life right, thanks to a freakish accident that catapults him back to 1980, as a 14-year-old.The show premiered on The WB Television Network. He appeared on the Tonight Show with Jay Leno as this show opened. The series was canceled short of a full season. Badgley later appeared in Drive-Thru playing Van co-starring future castmate Leighton Meester.

Wider audiences may recognize him from his next starring role as Sam Tunney in The Mountain (2004–2005), but was canceled after the first season. The same thing happened to The Bedford Diaries, another series where Badgely had a lead role. While the show was popular, it was canceled in its first season.

In The CW’s new drama Gossip Girl, Badgley portrays Dan Humphrey, the son of 1990’s former rock star Rufus Humphrey (Matthew Settle) and brother of Jenny Humphrey (Taylor Momsen). He plays the love interest of Upper East Side’s “it” girl, Serena van der Woodsen (Blake Lively). The show revolves around the lives of socialite young adults growing up on New York’s Upper East Side who attend elite academic institutions while dealing with sex, drugs, and other teenage issues. He starred in the 2009 remake of the 1987 American thriller film The Stepfather, in which he is the stepson of the killer and plays an important role in the movie.

In April, it was announced that Badgley will appear in a financial thriller drama, the upcoming 2011 movie Margin Call.