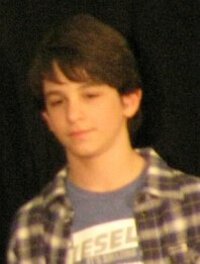 Gordon was born in California, to Linda and Ken Gordon. He has two siblings, Josh and Kyle, and was raised in Southern California. He currently attends a public middle school in Oak Park, California.

Gordon’s resume includes many television appearances, such as All of Us, and How I Met Your Mother. He has also appeared in the 2008 opening of Desperate Housewives, and 24, which aired in January 2009.

His film credits (2007–2008) include Sex and Death 101, Lower Learning, the Garry Marshall film Georgia Rule (for which he won the “Young Artist Award” for his portrayal of Ethan), The Brothers Bloom, as Young Bloom, and alongside Nicolas Cage in National Treasure: Book of Secrets (2007). Gordon has been credited with numeous voice-over roles including “Brad Spolyt” in The Chubbchubbs Save Xmas, “Ricky Garcia” in Project Gilroy, San San” in Nick Jr.’s Ni Hao, Kai-Lan and The Mighty B! He is a series regular as the voice of Gil, one of the lead roles in the Nickelodeon series, Bubble Guppies. Gordon has voice acted as Baby Melman in the animated film, Madagascar: Escape 2 Africa, Kotaro in Afro Sumurai: Resurrection, and Young Tony Stark in The Super Hero Squad Show. In 2010, he played Greg Heffley in the film Diary of a Wimpy Kid, and will appear as Papi Jr. in Beverly Hills Chihuahua 2.

In June 2010, 20th Century Fox announced a sequel to Diary of a Wimpy Kid; Gordon will return as Greg Heffley.