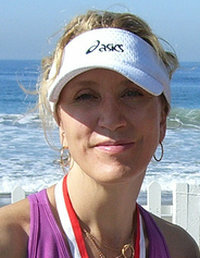 Felicity Kendall Huffman (born December 9, 1962) is an American actress. She is known for her role as hectic supermom Lynette Scavo on the ABC show Desperate Housewives, which earned her an Emmy Award. A year later, her critically-acclaimed role as a trans woman in the independent film Transamerica earned her a Golden Globe Award and an Academy Award nomination.

Huffman is known for her roles in Desperate Housewives and Transamerica. On television, she starred as Dana Whitaker in the dramedy Sports Night, and has had guest starring roles on Frasier, The X-Files, The West Wing, Early Edition, and Studio 60 on the Sunset Strip. In 2001 she appeared in the made for TV movie Snap Decision with Mare Winningham. Huffman has appeared in films such as Raising Helen and Christmas with the Kranks. In 2003, she starred in Showtime’s dramedy Out of Order.

Huffman is also the co-author of the self-help book, A Practical Handbook for the Boyfriend.

She is the only actress (other than actor Timothy Davis-Reed) who has appeared in all three television shows created by Aaron Sorkin (Sports Night, The West Wing, and Studio 60 on the Sunset Strip).

On June 23, 2008, the Hollywood Chamber of Commerce announced Huffman and her husband William H. Macy would each receive a star on the Hollywood Walk of Fame in the upcoming year.

Felicity Huffman is planning to return to New York City and to Broadway again.

She made a film, Lesster, as a writer, director and actress in 2010.

Felicity Huffman plays in the film Come Back to Sorrento director by David Mamet, and drama Keep Coming Back with William H. Macy in 2011.

A report in November 2010 suggested that Huffman, along with co-star Teri Hatcher, would be quitting Desperate Housewives, but ABC denied the claim.