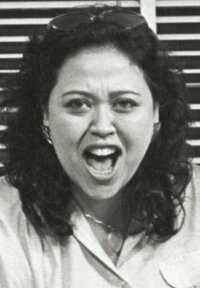 Amy Marie Hill (born May 9, 1953) is an American actress. She is perhaps best known for her roles as Mrs. DePaulo in That's So Raven, Mrs. Kwan in The Cat in the Hat, and the voice of Jasmine Lee (a.k.a. "Ah-Mah") on The Life and Times of Juniper Lee.

Hill was born in Deadwood, South Dakota, to a Japanese mother and a Finnish American father. She became an acclaimed actress working with the famed Asian American Theater Company in San Francisco, California. Hill is also known in the theatre world as a respected performance artist, having written and performed a number of one-woman shows, including the trilogy of Tokyo Bound, Reunion, and Beside Myself.

Other film and television roles include the grandmother on Margaret Cho’s short-lived All American Girl, Kay Ohara on Maybe This Time co-starring with TV legend Betty White and former All American Girl co-star Ashley Johnson, Sue on 50 First Dates, an Eskimo on Night Court, Ms. Rangoon on Max Keeble’s Big Move, Jocelyn Davis in Big Fat Liar, Psychic Manna Lisa on an episode of Six Feet Under, Louisa Pate in an episode of Desperate Housewives, Kahn’s mother Laoma and Cotton’s Japanese war bride Michiko in King of the Hill, Judge Gu in an episode of The Sarah Silverman Program, Judge Eva Fwae Wun in Let’s Go To Prison, the nurse who assisted Dr. Rawls (Lou Rawls) on My Wife & Kids, and as the lesbian daughter of D. L. Hughley’s neighbor (played by Pat Morita) on The Hughleys.