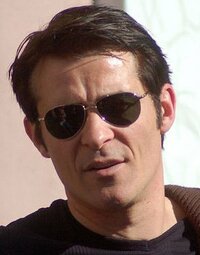 The most famous Croatian actor, Goran Visnjic is one of the public's most favorite. Starring in many TV Series as a main antagonist, Visnjic has the warm charisma needed to conquer your heart.

Goran Visnjic was born on September 9, 1972 in the small town of Sibenik, Croatia, where he spent his childhood. He grew up in a modest, happy family. His father worked as a bus driver, and his mother was a saleswoman in a small grocery store. From an early age Goran Visnjic showed signs of interest in art and acting in particular. He had his acting beginnings in the local children’s theater where he played in several productions. In 1988, he won his first movie role in the film “Brothers by Mother” which helped him realize that cinema is his true calling, and thus decided to continue his studies at the Academy of Dramatic Arts in Zagreb, from where he successfully graduated.

By the time he turned 21, Goran Visnjic had already gained great popularity in his native Croatia. He was casted to play Hamlet, which brought him the prestigious award “Orlando” and the national award for best actor. After seeing him perform, taken by his acting skills a noted American producer invited Goran Visnjic to come to US and try his luck there with acting. Once he arrived in the States, his natural charisma helped him get started, and in 1998 he was offered to appear in Madonna’s video for “The Power of Love”.

The following year Goran Visnjic had his biggest career turning moment when he was casted as Dr. Luka Kovac in the popular TV Series “ER”. It wasn’t long before this handsome actor won over the hearts of the audience, and after a few years he became the leading actor in the series. While working on the series, Goran Visnjic also took part in several other projects. Alongside some of Hollywood’s biggest stars, he appeared in movies like “The Peacemaker”, “Committed”, “Electra”, “Beginners”, “The Girl with the Dragon Tattoo” and many more. In his spare time, he and his wife love helping animals, and so far they have started and funded several animal rescue organizations.