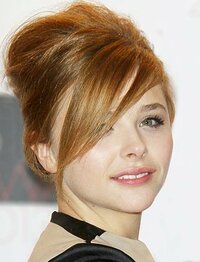 Chloë Grace Moretz (born February 10, 1997) is an American teen actress, known for her role as Hit-Girl in the 2010 superhero film Kick-Ass. She also appeared in (500) Days of Summer and Diary of a Wimpy Kid, and portrayed Abby, the child vampire, in Let Me In.

Her first role in Hollywood was as Violet in two episodes of the series The Guardian, and her first film role was as Molly in Heart of the Beholder.

It was not until her second big-screen acting role, in the 2005 remake of The Amityville Horror that she earned greater recognition in the form of a Young Artist Award nomination. After Amityville, Moretz’s acting career progressed further when she received several guest-starring roles on TV, as well as a role as one of the family children in Big Momma’s House 2. Among the most notable of her TV roles to date are Candy Stoker in an episode of My Name Is Earl, and Sherri Maltby in Desperate Housewives. Moretz also voiced the U.S. version of the animated character Darby in My Friends Tigger & Pooh.

After her first film premiere in The Amityville Horror, she has been a frequent guest at film premieres. She has an interest in fashion, and often wears clothes in her own distinctive style.

In 2010, Moretz appeared as Hit-Girl in director Matthew Vaughn’s superhero film Kick-Ass, based on the graphic novel of the same name by Mark Millar and John Romita, Jr., for which she has received widespread critical acclaim. Moretz trained with Jackie Chan’s stunt crew for three months prior to filming Kick-Ass and did most of her own stunts while filming on location. Also that year, she played Abby, a 12-year-old vampire, in the American remake of the Swedish film Let the Right One In, which was released on October 1, 2010. On March 30, 2010 Moretz was cast as little Ann in the psychological thriller The Fields.

Moretz’s projects for 2010 include playing the role of Isabelle in Martin Scorsese’s film adaptation of The Invention of Hugo Cabret, and Hick, an adaptation of the novel by Andrea Portes.

Moretz has signed on to play the leading role in Emily the Strange. The project was first mentioned over two years ago, when Dark Horse Entertainment president Mike Richardson announced his plans to bring the character to the big screen. First started as an iconic image in 1991 and used to promote a clothing line from Cosmic Debris, the Gothic teen has developed a back story through a series of Dark Horse Comics, which have been published since 2001.