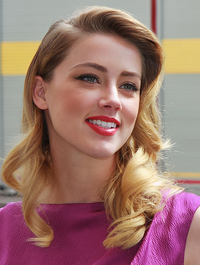 Amber Laura Heard (born April 22, 1986) is an American actress. Heard's first starring role came in 2007 on the CW television show, Hidden Palms and her breakthrough came in 2008 with roles in Never Back Down, Pineapple Express and as the lead and title character in All The Boys Love Mandy Lane, which debuted at the Toronto International Film Festival in 2006.

Once in Los Angeles, Heard made appearances in various TV shows and a music video, Kenny Chesney’s “There Goes My Life”. She was cast as Liz in the pilot episode of The WB’s Jack & Bobby (2004), as Riley in an episode of The Mountain (2004) and she had a brief cameo as a salesgirl in The O.C. (2005). Her first movie role was Maria in Friday Night Lights (2004). She next starred as Shay in Side FX (2005), an independent horror film, and had supporting roles in Drop Dead Sexy (2005), Price to Pay (2006) and You Are Here (2006). Heard had more prominent parts in Niki Caro’s North Country (2005) as young Josey and as Alma in Nick Cassavetes’ Alpha Dog (2006). In 2006 she starred in an episode of Criminal Minds as Lila Archer, a young Hollywood actress who has a crush on Spencer Reid.

Heard was next cast in the CW Network’s Hidden Palms. On the show she portrayed Greta Matthews, who suffered the losses of both her mother and boyfriend, Eddie, and befriends Johnny, the anti-hero of the show. In order to get the part, Heard was asked to lose weight. It took her four months, daily workouts and a ban on carbohydrates to lose 25 pounds. Hidden Palms premiered in the US on May 30, 2007. Ultimately, The CW wrapped the summer series early; instead of the initial 12 episode arc, only eight were aired. The show ended on July 4, two weeks prior than originally planned.

She was next cast in the title role in All the Boys Love Mandy Lane. The horror film premiered at the Toronto Film Festival in September 2006, immediately generating buzz and landing a deal with Harvey Weinstein. However, nearly a year after its Toronto debut, the movie had not reached theaters. In July 2007, Mandy Lane found a new distribution home and the film finally was released in 2008 with a February UK release and DVD release in June.

In 2007, Heard also appeared in the short movie Day 73 with Sarah and Jess Manafort’s indie drama Remember the Daze (aka The Beautiful Ordinary), which premiered at the Los Angeles Film Festival in June and opened in limited release in April 2008. She then appeared in the Judd Apatow-produced, Rogen and Goldberg-written comedy Pineapple Express and the martial arts drama Never Back Down, released in 2008, back-to-back. The latter opened in March and Heard played the role of the free-spirited Baja Miller who falls for Sean Faris’ Jake Tyler.

Heard also made a brief appearance in Showtime’s Californication and joined the ensemble cast of The Informers, based on Bret Easton Ellis’ novel of the same title, set to be released in 2009. She also filmed the horror film The Stepfather and the comedy film Ex-Terminators back-to-back in 2008 while promoting Never Back Down, Mandy Lane and Remember the Daze.

In late 2008 she filmed The River Why and The Joneses; two independent features. At the beginning of 2009 The Informers made its premiere at the Sundance Film Festival. The reviews were mostly negative. Heard next appeared in Zombieland, playing a small role as the object of Jesse Eisenberg’s affection who turns into a zombie. She will subsequently appear in John Carpenter’s The Ward. In March Heard begins filming The Rum Diary, opposite Johnny Depp, in Puerto Rico. Heard is reported to have won the role out over Scarlett Johansson and Keira Knightley. In 2010, she will star in and produce And Soon the Darkness, co-starring Odette Yustman and Karl Urban.

In the October 2009 issue of Teen Vogue, Amber describes her role as Johnny Depp’s love interest in the film, The Rum Diary, as “the best experience of my life.”

In February 2010, Heard was cast in Drive Angry, a 3-D psychological thriller directed by Patrick Lussier.