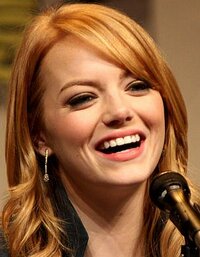 Emily Jean "Emma" Stone (born November 6, 1988) is an American actress. Stone was a cast member of the TV series Drive, and made her feature film debut in the comedy Superbad (2007). She appeared in The House Bunny (2008) and Ghosts of Girlfriends Past (2009).

Stone launched a career in television after winning the role of Laurie Partridge on In Search of the New Partridge Family (2004), a VH1 talent competition reality show. The resulting show, The New Partridge Family (2005), only produced a pilot episode. Stone next had appearances in the television series Medium, Malcolm in the Middle and Lucky Louie. In 2007, she had a regular role on the Fox drama Drive, playing Violet Trimble, until the series was cancelled.

Stone made her feature film debut in the 2007 teen comedy Superbad, playing Jules, the love interest of lead character Seth (Jonah Hill). In 2008, she appeared in the comedy The Rocker, with Rainn Wilson. Stone played Amelia, the bassist in a band featuring singer Teddy Geiger. Stone learned to play bass for the role. Also that year, Stone appeared in The House Bunny, starring Anna Faris, alongside Katharine McPhee, Kat Dennings, Rumer Willis, and Colin Hanks. Stone played the president of a sorority and sang on a single from the film, “I Know What Boys Like”, a cover version of the 1982 song by The Waitresses.

In 2009, Stone appeared in Ghosts of Girlfriends Past, a romantic comedy directed by Mark Waters, the director of Mean Girls (2004), starring Matthew McConaughey and Jennifer Garner. Stone played “The Ghost of Girlfriends Past”, a takeoff of the Ghost of Christmas Past from Charles Dickens’ A Christmas Carol. She starred in the horror/comedy Zombieland, along with Woody Harrelson and Jesse Eisenberg. The project, her third comedy for Columbia Pictures, began shooting in Atlanta in February 2009. Stone played Wichita, a survivor/con artist from Wichita, Kansas, traveling across the U.S. with her younger sister Little Rock (Abigail Breslin).

Stone had a voice role in Marmaduke in 2010, a film adaptation of the long-running comic strip about a Great Dane. She voiced Marmaduke’s friend, Mazie, an Australian Shepherd who is a bit of a tomboy. Stone landed her first leading role starring as a high school student in Easy A with Amanda Bynes, a comedy directed by Will Gluck. Her character scandalizes her teachers and more conservative religious classmates after a false rumor circulates that she is sexually promiscuous. The script contrasts the novel The Scarlet Letter and its heroine, Hester Prynne, to the life of the protagonist in the film. Stone was nominated for the 2011 Golden Globe Award for Best Actress in a Musical or Comedy for her role.

Stone will star in Crazy, Stupid, Love, alongside Steve Carell, Julianne Moore, Ryan Gosling and Marisa Tomei. The Warner Bros. film, about a husband (Steve Carell) with marital problems and difficulties with his children, began shooting on April 16, 2010 in Los Angeles. Stone will also star in The Help, an adaptation of Kathryn Stockett’s best-selling novel of the same name, a period piece set in Jackson, Mississippi in the 1960s. She plays Eugenia “Skeeter” Phelan, an aspiring writer, and plans to employ a Southern dialect for the role.

Stone joined the voice cast of The Croods, a 3D computer animated caveman comedy by DreamWorks Animation. She will voice the role of Eep, the oldest daughter of Grug (Nicolas Cage) and Ugga (Catherine Keener). Ryan Reynolds voices Gy, the love interest to Stone’s character. The film is scheduled for release on March 30, 2012. She also joined the cast of Friends With Benefits, starring Justin Timberlake and Mila Kunis, and directed by Will Gluck. The relationship comedy began filming in July 2010 in New York.

Stone appeared at the 2010 MTV Video Music Awards on September 12, 2010, and introduced Linkin Park. She stated in 2008 that she would eventually like to venture into film production, producing her own films, and that her dream was to appear on Saturday Night Live. Stone hosted the late-night sketch comedy show on October 23, 2010. She stars in the comedic short film, “Veronica”, alongside Kieran Culkin, directed by Griffin Dunne. The short is part of an as-yet untitled anthology film, featuring Kate Winslet and Gerard Butler, produced by the Farrelly brothers.

Stone will star as the female lead in a reboot of the Spider-Man film series by Columbia Pictures and Marvel Entertainment. She plays Gwen Stacy, Peter Parker’s love interest, in the Marc Webb-directed film; a release date of July 3, 2012 has been set. The film went into production in December 2010 and is scheduled to last through April 2011. Stone was considered for the lead in a reboot of 21 Jump Street, alongside Superbad co-star Jonah Hill. She did not take the role however, after signing on to Spider-Man. Stone will again work with writer/director Will Gluck, starring in and executive producing an untitled comedy for Screen Gems.