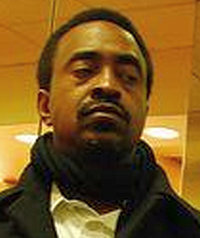 Tim Meadows (born February 5, 1961) is an American actor and comedian best known as one of the longest running cast members on Saturday Night Live.

Meadows was born in Highland Park, Michigan, the son of Mardell, a nurse’s assistant, and Lathon Meadows, a janitor. Meadows’s start in show business was as a member of The Second City comedy troupe alongside future star Chris Farley. In 1991, Meadows landed a spot on Saturday Night Live and would go on to become a longtime cast member, appearing on the program until 2000. (This was the record for the longest tenure on the show until it was surpassed by Darrell Hammond in 2005). Meadows’s lengthy tenure on the show was used as a gag in three monologues when former cast members Phil Hartman and Mike Myers returned to the show to host, and when Alec Baldwin hosted for his twelfth time.

Meadows usually spoofed famous characters such as Oprah Winfrey and Erykah Badu on SNL, and one time remarked that he had no character that was identified to him, such as Wayne and Garth being identified to Mike Myers and Dana Carvey. Eventually he did get an original character with Leon Phelps, “The Ladies’ Man”, a perpetually horny talk show host who believed himself to be the living definition of what females search for in a man. The sketch/character was adapted into a 2000 film, The Ladies Man, which followed the character’s attempts to find love and a suitable outlet for his beloved radio program. Despite a surprise guest appearance by Meadows on Saturday Night Live immediately following his departure to promote the movie, it was not well-received by critics or fans and subsequently flopped at the box office. In 2001 he co-starred in Three Days (2001); in 2003 he appeared as Miles McDermott in The Even Stevens Movie.

Meadows soon moved on to other projects, including a regular role on the short-lived NBC sitcom The Michael Richards Show and a supporting role in the 2004 film The Cookout. He also guest starred as a client on the hit NBC comedy The Office in the second-season episode “The Client”. His greatest post-SNL success to date, however, was a major role as a high school principal in Mean Girls, a film written by (and co-starring) fellow SNL cast member Tina Fey. He also had a part in Handsome Boy Modeling School’s album White People. In 2007, he appeared in large supporting role in Walk Hard: The Dewey Cox Story.

Meadows has appeared in other feature films, including Coneheads, It’s Pat, and Wayne’s World 2, all of which were based on popular SNL characters and had varying rates of success. Most recently he was in the 2006 film The Benchwarmers alongside his former SNL co-stars Rob Schneider and David Spade. He was also featured in CBS’s Gameshow Marathon (summer 2006), has appeared on The Colbert Report in the recurring role of P.K. Winsome (who made an appearance at the Rally to Restore Sanity and/or Fear), and starred in The Bill Engvall Show. He is also a frequent guest on the Late Late Show With Craig Ferguson as a comic field reporter. On May 31, 2008, Meadows threw out a ceremonial first pitch and conducted the seventh-inning stretch at Wrigley Field during a Chicago Cubs game against the Colorado Rockies.

Meadows can frequently be seen performing live at the iO WEST with Heather Campbell and Miles Stroth in their improvised show Heather, Miles, and Tim. Recently, Meadows has been back performing in the Chicago improv scene at the ImprovOlympic and other venues.