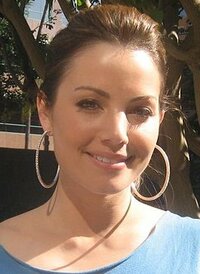 Erica Durance (born June 21, 1978) is a Canadian actress. She has also been credited as Erica Parker. She is best known for her role as Lois Lane on the Superman-inspired television series Smallville.

In 2004, she guest-starred on The Chris Isaak Show playing Ashley, a woman on a date with Chris. In Tru Calling, her character was a contender in a beauty pageant opposite Eliza Dushku’s character. On the Sci-Fi Channel, she played an intergalactic librarian in Andromeda and a love interest for Teal’c in Stargate SG-1. She also played a sister to one of the leads in the Canadian show The Collector. Durance was cast as Lois Lane on Smallville prior to the beginning of the 4th season. Executive Producer Kelly Souders recalled hiring Durance stating: “There were a lot of wonderful actresses who came in for the role but I remember sitting and watching her tape and everybody was like, ‘That’s her. There’s no question.” Fellow producer Brian Peterson added that from the moment Durance was hired they knew she would be Lois for the series. 3 Durance was a frequent guest star for the 4th season of Smallville and was then promoted as a series regular for the 5th season. She is still part of the regular cast and will appear in all 22 episodes of the (current) 10th and final season.

Durance has admitted that when she was growing up in Canada she regularly read the Superman comics and saw all of the Superman movies.