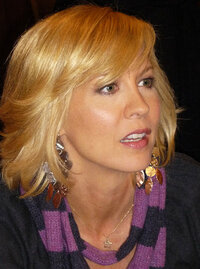 Jenna Elfman (born September 30, 1971) is an American television and film actress. She is known for her role as Dharma on the ABC sitcom Dharma & Greg.

Jenna appeared in the Halo music video by Depeche Mode in 1991, as one of the dancers.

The short-lived 1996 sitcom Townies didn’t catch on with viewers but did impress critics, particularly the performances of Elfman and co-star Lauren Graham. The next year, Elfman started a five-year run as Dharma in Dharma and Greg. Elfman guest starred in two episodes of Two and a Half Men in 2004 and one episode of Brothers and Sisters in 2007. She made a guest appearance in the sixth episode of season four of My Name Is Earl as a cheer team leader.

Elfman starred in the CBS comedy Accidentally on Purpose. The show was canceled after a single (2009–2010) season.