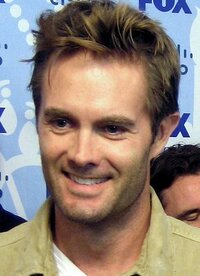 Garret Dillahunt (born November 24, 1964) is an American actor. He is married to actress Michelle Hurd.

After spending years on and off Broadway, Dillahunt began pursuing television and film roles. He appeared as a regular in several short lived series on ABC and Showtime, and landed guest spots on popular TV shows such as The X Files and NYPD Blue among others, before playing two distinctly different characters on the HBO series Deadwood: Jack McCall in 2004 and Francis Wolcott in 2005. He later played a recurring role on the USA Network series The 4400.

Films in which he has appeared include The Assassination of Jesse James by the Coward Robert Ford, No Country For Old Men, The Road, The Last House On The Left and the indie horror film, Burning Bright.

It was announced on August 20, 2009 that Dillahunt would square off with Rosie Perez on an episode of Law & Order: SVU in 2009 about pedophiles’ rights. Dilahunt played the head of a pedophilia organization. “It’s called ‘Hardwired’”, executive producer Neal Baer said, “because they believe that pedophilia is [a genetic predestination].” He guest starred as Simon Escher in the Burn Notice third season finale airing March 4, 2010 on the USA, later reprising the role in the show’s fourth season.