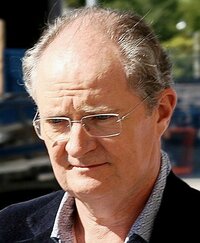 James "Jim" Broadbent (born 24 May 1949) is an English theatre, film, and television actor. He is known for his roles in Iris, Moulin Rouge!, Topsy-Turvy, Hot Fuzz, The Chronicles of Narnia: The Lion, The Witch and the Wardrobe and Bridget Jones' Diary. He also appears in the Harry Potter films as Horace Slughorn.

Broadbent’s early stagework included a number of productions for The National Theatre of Brent, as the downtrodden assistant Wallace to Patrick Barlow’s self-important actor/manager character Desmond Olivier Dingle. Broadbent and Barlow played many male and female character roles in comically less-than-epic tellings of historical and religious stories such as The Messiah, The Complete Guide to Sex, The Greatest Story Ever Told (the story of Jesus), Revolution!!, and All The World’s A Globe (about Shakespeare). These were hits at the Edinburgh Fringe, in London, and on tour. Later stage work included the original productions of Kafka’s Dick (1986) and Our Country’s Good (1988) at the Royal Court Theatre and work for the Royal National Theatre including “The Government Inspector”. Work on the stage with Mike Leigh includes Goosepimples and Ecstasy.

Broadbent made his film debut in 1978 with a tiny role in Jerzy Skolimowski’s The Shout, and made his television debut the following year. He went on to work with Stephen Frears (for television and in The Hit (1984)) and Terry Gilliam (in Time Bandits (1981) and Brazil (1985)) before establishing himself in Mike Leigh’s Life Is Sweet (1990). He proved his ability as a character actor in films including The Crying Game (1992), Enchanted April (1992), Bullets Over Broadway (1994), The Borrowers (1997), and Little Voice (1998) before taking a leading role in another Mike Leigh film, Topsy-Turvy (1999), playing dramatist Sir William S. Gilbert. He played “The Shy Doctor” in the 1999 Comic Relief parody Doctor Who sketch, Doctor Who and the Curse of Fatal Death. In 2001, Broadbent starred in three of the year’s most successful films: Bridget Jones’s Diary; Moulin Rouge!, for which he won a BAFTA; and Iris, for which he won an Oscar for his portrayal of John Bayley.

Broadbent is known for his role as the secondary antagonist Madame Gasket from the 2005 film Robots, which won him an award. Broadbent also appeared as DCI Roy Slater, an associate character in the enormously popular sitcom Only Fools and Horses. The character appeared in three episodes over an eight-year period. He had originally been offered the lead role of Del Trotter in the series, but he turned it down due to other commitments. He has also played a role in the Inspector Morse series. Other comic roles include the lead role in the sitcom The Peter Principle and occasional guest appearances in Not The Nine O’Clock News, Only Fools and Horses, and Victoria Wood As Seen On TV. He played Don Speekingleesh in The Queen of Spain’s Beard in the first series of The Black Adder in 1983. He also played the role of Prince Albert in Blackadder’s Christmas Carol, first broadcast in 1988. He joined Rowan Atkinson in his Spider-Man spoof Spider-Plant Man, as a disgruntled Batman, jealous of Spider-Plant Man’s success.

Broadbent played the title role in the Channel 4 drama Longford in October 2006, earning a BAFTA TV Award, a Golden Globe, and a 2007 Emmy nomination for his performance as Frank Pakenham (1905–2001), Earl of Longford , which was centred on the late Lord’s ultimately unsuccessful campaign for the parole of Myra Hindley from her life imprisonment for the Moors Murders.

Broadbent appeared as Inspector Frank Butterman in Hot Fuzz in 2007.

He appeared in the original radio production of The Hitchhiker’s Guide to the Galaxy, playing the character Vroomfondel. He was also a regular in Stephen Fry’s radio comedy show Saturday Night Fry, which aired on BBC Radio 4 in 1988.

Broadbent plays Dean Charles Stanforth in the fourth film in the Indiana Jones series, Indiana Jones and the Kingdom of the Crystal Skull; King William IV in The Young Victoria; and Horace Slughorn in the sixth Harry Potter movie, Harry Potter and the Half-Blood Prince. In 2008, he starred as pro-Newtonian physicist Sir Oliver Lodge in the fact-based single drama Einstein and Eddington, for the BBC. In 2010, he provides the voice for the character Major Mouse in a series of radio adverts and one produced for television for energy company; E.ON for their ‘eonenergyfit.com’ website campaign. He also starred as the older Logan Mountstuart in the TV adaptation of William Boyd’s novel Any Human Heart.

He is currently filming Exile, a BBC One drama, starring John Simm and written by Danny Brocklehurst.