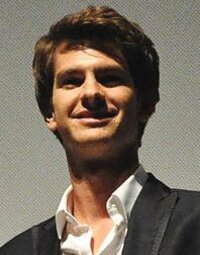 Andrew Russell Garfield (born 20 August 1983) is an American-British actor who has appeared in radio, theatre, film, and television. He is known for his roles in the 2007 films Lions for Lambs and Boy A, 2009's The Imaginarium of Doctor Parnassus, and the 2010 drama The Social Network.

Garfield started taking acting classes in Guildford when he was fifteen, and appeared in a youth theater production of Bugsy Malone.8 He also joined a small youth theater workshop group in Epsom, and began working primarily as a stage actor. In 2004, he won a MEN Theatre Award for his performance in Kes at Manchester’s Royal Exchange Theatre (where he also played Romeo the year after), and won the outstanding newcomer award at the Evening Standard Theatre Awards 2006.

Garfield made his British television debut in 2005, appearing in the Channel 4 teenage drama Sugar Rush. In October 2007, he was named one of Variety’s “10 Actors to Watch”, and in November 2007, appeared in the ensemble drama Lions for Lambs, playing an American university student. Also that month, he starred in the Channel 4 drama Boy A, for which he won the 2008 BAFTA for Best Actor. In 2008, he had a minor role in the film The Other Boleyn Girl, and was named one of the shooting stars at the Berlin International Film Festival.

Garfield appeared in Vogue’s December 2009 issue, modeling alongside Lily Cole, in a photographed retelling of Hansel and Gretel. Also that year, Garfield had a supporting role in the Terry Gilliam film The Imaginarium of Doctor Parnassus and the Red Riding television trilogy. In 2010, he co-starred in the British sci-fi drama Never Let Me Go, as well as in David Fincher’s The Social Network, alongside Brenda Song, Justin Timberlake and Jesse Eisenberg. The latter film, about the founders of Facebook, was based on Ben Mezrich’s book The Accidental Billionaires: The Founding of Facebook, a Tale of Sex, Money, Genius and Betrayal.

On August 5, 2010, Garfield appeared briefly as Terry Gilliam’s assistant in the Arcade Fire webcast pre-show at Madison Square Garden. On September 12, 2010, he co-presented at the 2010 MTV VMAs, with Jesse Eisenberg and Justin Timberlake.

Garfield has been chosen to play Spider-Man opposite Emma Stone in Marc Webb’s 2012 Spider-Man reboot.

On December 14, 2010, The Social Network received six nominations for The 68th annual Golden Globe Awards, which will be held on January 16, 2011. Garfield was nominated for a Golden Globe Award for Best Performance by an Actor in a Supporting Role.