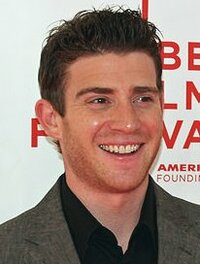 Bryan E. Greenberg (born May 24, 1978) is an American actor and musician, known for his starring role as Ben Epstein in the HBO original series How to Make It in America as well as a recurring role as Jake Jagielski in the CW Network TV show One Tree Hill and as Nick Garrett on the short-lived ABC drama October Road.

After embarking on a Bachelor of Fine Arts in Theatre course at New York University, Greenberg landed roles in many theatre companies. He was cast as Romeo in NYU’s performance of Romeo and Juliet. In 1997, he was offered a small role on the television show Law & Order. Soon after his appearance, he was assigned an agent and one year later made his big screen debut in A Civil Action, a movie starring John Travolta.

A few years later, after landing small roles on the TV shows (Boston Public, The Sopranos, and Third Watch among others), Greenberg was cast as Matty Matthews, a high school student trying to pass the S.A.T, in the movie The Perfect Score. While he was still appearing in One Tree Hill, he began shooting another television show for HBO called Unscripted. Greenberg’s first starring role was in the Ben Younger film Prime (2005). He played David Bloomberg, a young artist who falls in love with one of his mother’s (Meryl Streep) patients (Uma Thurman).

In 2007, Greenberg released his debut album, Waiting for Now. Over the past few years he has toured with Gavin Degraw, Michael Tolcher, Ari Hest, and Graham Colton. At his New York City Show at the High Line Ballroom, Greenberg was joined by How to Make it in America co-star, Kid Cudi. Greenberg has had his songs placed in many of his film and television work, including One Tree Hill, October Road, Nobel Son and more. In 2008 he appeared in the Will.I.Am version of Barack Obama’s Yes We Can.

Greenberg then starred in October Road on ABC and appeared with Alan Rickman in the film Nobel Son in 2008.

In 2009, Greenberg appeared in the film Bride Wars with Kate Hudson and Anne Hathaway and starred in the indie film The Good Guy, which was released in February 2010.

His new series How to Make It in America premiered on HBO on February 14, 2010.

Greenberg made a PSA about the Gulf Oil Spill for Natural Resources Defense Council calling for Clean Energy Legislation. It was released July 20, 2010.