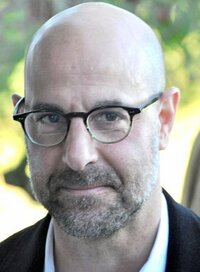 Stanley Tucci (born November 11, 1960) is an American actor, writer, film producer and film director. He has been nominated for several notable film awards, including an Academy Award for Best Supporting Actor, for his performance in The Lovely Bones (2009).

Tucci made his Broadway debut in The Queen and the Rebels on 30 September 1982. His film debut was in Prizzi’s Honor (1985). Tucci is known for his work in films such as The Pelican Brief, Kiss of Death, Road to Perdition and Big Night, and in the television series Murder One as the mysterious Richard Cross. Big Night (1996), which he co-wrote with his cousin Joseph Tropiano, starred in, and co-directed with Campbell Scott, premiered at the Sundance Film Festival. The film also featured his sister Christine and mother, who wrote a cookbook for the film. It won him and Tropiano the Independent Spirit Award for Best First Screenplay. He’s typically cast in supporting roles such as the sidekick or the villain, but has had the lead in two films, both romantic comedies: A Modern Affair (1995) and The Whole Shebang (2001).

He has been nominated three times for Golden Globes, and won twice — for his title role in Winchell (1998), and for his supporting role as Adolph Eichmann in Conspiracy (2001), both for HBO films. He also received a Screen Actors Guild Award nomination for Winchell. He was nominated for Broadway’s Tony Award as Best Actor in a Play for his role as Johnny in the 2002 revival of Terrence McNally’s Frankie and Johnny in the Clair de Lune.

In July 2006, Tucci made an appearance on the USA Network TV series Monk, in a performance that earned him a 2007 Emmy for Outstanding Guest Actor – Comedy Series. Tucci’s TV series, the medical drama 3 lbs., debuted on CBS in the 10:00 p.m. EDT time slot on November 14, 2006. It was canceled on November 30, 2006 due to low ratings. He can be heard as the voice over in the AT&T Wireless “Raising the Bar” marketing campaign. Tucci also played Nigel in the screen adaption of The Devil Wears Prada alongside Meryl Streep, Emily Blunt and Anne Hathaway. In 2007, Tucci had a recurring role in medical drama ER. In 2009, Tucci again starred opposite Meryl Streep in Julie & Julia playing husband Paul Child to her Julia Child. Also in 2009, Tucci portrayed George Harvey, the murderer of a young girl in The Lovely Bones, Peter Jackson’s adaptation of Alice Sebold’s novel, for which he received a Golden Globe and an Academy Award nomination. In 2010, Tucci is directing a revival of the Ken Ludwig play Lend Me a Tenor on Broadway, starring Tony Shalhoub. The show is expected to run through August. Tucci is cast as Dr. Abraham Erskine in Captain America: The First Avenger.

In July 2010 it was announced that Tucci will direct an upcoming comedy entitled Mommy & Me starring Meryl Streep and Tina Fey as mother and daughter.