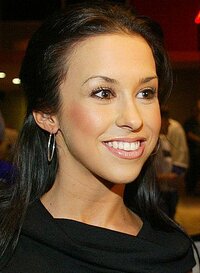 Lacey Nicole Chabert (born September 30, 1982) is an American actress and voice actress, best known for her roles as Claudia Salinger in the television drama Party of Five and as Gretchen Wieners in the movie Mean Girls.

Since 1998, she has been the voice of Eliza Thornberry in the animated series The Wild Thornberrys, and has voiced Eliza in two movies, The Wild Thornberrys Movie (2002) and Rugrats Go Wild (2003). She provided the voice of Meg Griffin for the first production season of the animated sitcom Family Guy (1999), after which Mila Kunis took over the role. Chabert played the title role in The Brooke Ellison Story, a made-for-TV movie produced by Christopher Reeve, based upon a real-life quadriplegic woman who overcame many obstacles to graduate from Harvard. She starred in Mean Girls (2004) and the made for TV movie Hello Sister, Goodbye Life (2006) on ABC Family. She appeared in a 2006 remake of Black Christmas. She appeared in an episode of Ghost Whisperer opposite former Party of Five costar Jennifer Love Hewitt. She performed the voice of Princess Elise from the game Sonic the Hedgehog for the PS3 and Xbox 360. She also voiced Gwen Stacy in the animated series The Spectacular Spider-Man.

Chabert won the 2005 MTV Movie Award for Best On-Screen Team for Mean Girls, shared with Lindsay Lohan, Rachel McAdams, and Amanda Seyfried. She won both the 1997 and 1998 Hollywood Reporter Annual YoungStar Award for Best Performance by a Young Actress in a Drama TV Series for Party of Five, and had been nominated three other times for work 1999–2000. The YoungStar awards honor the best film, TV and music performances made exclusively by six to eighteen-year-olds.

In 2007, Chabert starred in the pilot episode of the Fox comedy The Hot Years, which revolved around the lives of four female friends who live together. The pilot was not ordered to series by Fox. Chabert was featured as cover girl of the January 2007 issue of Maxim.