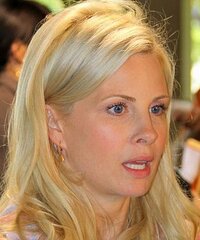 At the age of twelve, Potter started modeling and appearing in commercials in Chicago and Miami, before deciding to pursue an acting career. Her very first role on television was as a “Dalina” in the English version of the Peruvian TV show Nubeluz. Then she found a role on the daytime soap opera The Young and the Restless as Sharon Newman in 1994.

She has since appeared in several feature films, including Con Air (playing the wife of Nicolas Cage’s character) and starring opposite Robin Williams in Patch Adams. In 1998, she also played the love interest of doomed distance runner Steve Prefontaine in the movie Without Limits.

In 2001, she had two major roles, co-starring with Freddie Prinze Jr. in Head Over Heels, and with Morgan Freeman in the thriller Along Came a Spider based on the James Patterson best-seller. She was a cast member of the television series Boston Legal but left during the second season. In 2004, Potter played the role Alison Gordon in the first Saw film. In 2009, Potter became a cast member of the new TNT series Trust Me which was cancelled after the first season due to low ratings. Potter currently plays the role of Kristina Braverman in NBC’s comedy-drama Parenthoo.