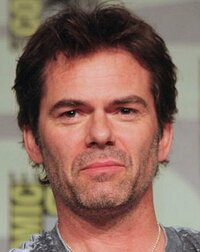 His motion picture credits include Jane Austen’s Mafia!, Along Came a Spider, Final Jeopardy, Flashpoint and Ladder 49. His upcoming film credits include The Fallen, Forfeit, Fracture and Retirement. He also appeared in Feast of Love (2007), co-starring Selma Blair and Morgan Freeman. In 2008, Burke appeared in Twilight, based on the best-selling novel by Stephenie Meyer, playing the role of Charlie Swan.1 He also portrayed Bobby’s brother Jack on the show My Boys. Burke reprised his role as Charlie Swan in Twilight’s sequels, New Moon and Eclipse.

Burke is one of the “famous faces” on the online poker website Hollywood Poker, which is run in conjunction with Ongame Network. In February 2010, Burke was cast in the thriller Drive Angry, which is directed by Todd Farmer and will co-star Amber Heard, Nicolas Cage and William Fichtner.

As of July 2010, Burke appears in the TNT drama series Rizzoli & Isles.