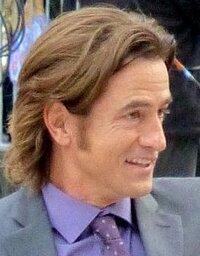 Most of his lead performances have been in romantic comedy films. Mulroney has appeared in many movies, including as the male lead in My Best Friend’s Wedding alongside Julia Roberts and Cameron Diaz. He is probably best known for his western roles as either an outlaw or gunman. Mulroney co-starred in the 1988 western Young Guns, for which he is possibly best known, in which he played “Dirty Steve” alongside Emilio Estevez, and in 1994 he starred alongside Mickey Rourke in The Last Outlaw, which has since become a cult classic among western genre fans. Mulroney also played the love interest of Madeleine Stowe in the western Bad Girls. He first gained critical acclaim in the film Longtime Companion, portraying a young man with HIV during the early days of the outbreak of the virus, who becomes the first of his group of friends to succumb to the disease. He was also in the ensemble film The Family Stone starring Sarah Jessica Parker. In 2005, he played a “date-for-hire” character alongside Debra Messing in The Wedding Date.

Mulroney played Gavin Mitchell on the TV series, Friends. His character dated Rachel for one episode but they broke up when it became too complicated between them because of Ross. In 1993, he wrote the song “Someone Else’s Used Guitar” for Peter Bogdanovich’s The Thing Called Love. Mulroney also had a cameo in the Joaquin Phoenix directed video “Tired of Being Sorry” for Balthazar Getty’s band Ringside. Mulroney also is credited as a song performer on the movie and for four other tunes, as well as acting in the movie. In 2007, Mulroney voiced Green Lantern Hal Jordan in the animated series The Batman in the season 5 episode “Ring Toss”. He occasionally reads stories on the WBEZ Chicago Public Radio radio show This American Life.