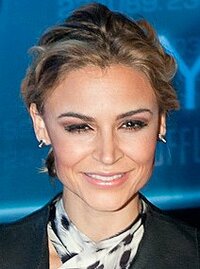 Samaire Rhys Armstrong (born October 31, 1980) is an American actress. She is best known for appearing in the television series The O.C. and Dirty Sexy Money. In 2006, she starred as Nell Bedworth in the comedy It's a Boy Girl Thing.

Armstrong’s first major break into film was as one of the conjoined twins, the Fratelli sisters, in the parody movie Not Another Teen Movie, as well as the teen movie It’s a Boy Girl Thing in which she played a studious literature-lover, Nell. However, she may be best known for her recurring role as Anna Stern in Fox’s popular drama The O.C.. She was initially only hired to appear in one episode. However, her popular portrayal of the character led to her return for several more episodes of the series due to the request of fans. Armstrong also had a recurring role on Freaks and Geeks, and had guest appearances on Judging Amy, Party of Five, CSI: Miami, Numb3rs and The X-Files. She also had a recurring role on the HBO television series Entourage. Her most recent film projects include Stay Alive, Just My Luck, and Rise: Blood Hunter.

Her first regular cast role on a television series was in the drama Dirty Sexy Money. However, in March 2008, it was announced that she would not return as a regular to the series in its next season. The series was cancelled due to low ratings after its second and final season.

She also appeared on the series premiere of the HBO comedy series How To Make It In America.

Armstrong has designed clothes for her own clothing brand, called NARU.

She has also appeared in music videos, including Hanson’s “Penny and Me” and Daniel Powter’s “Bad Day”.