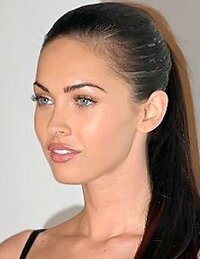 Megan Denise Fox (born May 16, 1986) is an American actress and model. She began her acting career in 2001 with several minor television and film roles, and played a recurring role on Hope and Faith.

In 2007, Fox won the lead female role of Mikaela Banes in the 2007 live-action film Transformers, based on the toy and cartoon saga of the same name. Fox played the love interest of Shia LaBeouf’s character Sam Witwicky. Fox was nominated for an MTV Movie Award in the category of “Breakthrough Performance”, and was also nominated for three Teen Choice Awards, in the category of “Choice Movie Actress: Action Adventure”, “Choice Movie: Breakout Female”, and “Choice Movie: Liplock”. Fox has signed on for two more Transformers sequels. In June 2007, Fox was cast in a minor role in How to Lose Friends & Alienate People, starring alongside Jeff Bridges, Simon Pegg and Kirsten Dunst. She portrayed Sophie Maes, a love interest of Sydney Young (Simon Pegg). The film premiered on October 3, 2008, but was considered a box-office failure. In 2008, Fox appeared alongside Rumer Willis as the character Lost in Whore. The film centers around a group of young hopeful teenagers who have come to Hollywood in the hopes of an acting career find that the business is harder than they had ever imagined. The film was released October 20, 2008.

Fox reprised her role as Mikaela Banes in the Transformer sequel, Transformers: Revenge of the Fallen. There was some controversy surrounding Fox’s appearance while filming the sequel of Transformers when Michael Bay, the movie’s director, ordered the actress to gain 10 pounds.23 Transformers: Revenge of the Fallen premiered on June 8, 2009 in Tokyo, Japan. The movie was released worldwide on June 24, 2009. Fox had her first lead role playing the title character in Jennifer’s Body, written by Academy Award-winning screenwriter Diablo Cody. She played Jennifer Check, a mean-girl cheerleader possessed by a demon who begins to feed off the boys in a Minnesota farming town. The film was released on September 18, 2009, and co-stars Amanda Seyfried and Adam Brody.

In April 2009, Fox began filming Jonah Hex, in which she portrayed Leila, a gun-wielding beauty and Jonah Hex’s (Josh Brolin) love interest. The film was released on June 18, 2010 and co-starred Will Arnett; Fox has described her role in the film as being a cameo. In early April, 2009 Fox signed on to star as the lead female role in the upcoming 2011 film The Crossing, about a young couple who get caught up in a drug trafficking scheme during their vacation to Mexico. In March 2009, Variety reported that Fox was set to star as the lead role of Aspen Matthews in the film adaption of the comic books Fathom which she will also co-produce with Brian Austin Green. Fathom is currently in pre-production. Fox will not reprise her role as Mikaela Banes in Transformers: The Dark of the Moon. Fox appeared with Dominic Monaghan in the music video for Eminem and Rihanna’s single “Love the Way You Lie”.