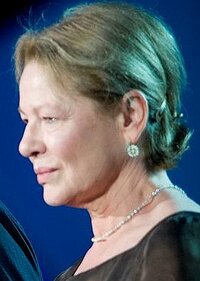 Dianne Wiest (born March 28, 1948) is an American actress. She has had a successful career on stage, television, and film, and has won two Academy Awards, two Emmy Awards and a Golden Globe Award. Wiest has also been nominated for a BAFTA Award.

Under Woody Allen’s direction, Wiest won an Academy Award for Best Supporting Actress for Hannah and Her Sisters in 1987 and Bullets Over Broadway in 1995.8 She also appeared in three other Woody Allen films: The Purple Rose of Cairo (1985), Radio Days (1987) and September (1987).

Her early screen roles include small roles in It’s My Turn and I’m Dancing as Fast as I Can, both starring Jill Clayburgh in the lead roles.

In 1984, she starred in Footloose, as the reverend’s wife.

She followed her first Oscar success with performances in The Lost Boys (1987) and Bright Lights, Big City (1988). She also starred with Steve Martin, Mary Steenburgen, Jason Robards, Keanu Reeves and Martha Plimpton in Ron Howard’s Parenthood, for which she received her second Oscar nomination.

In 1990, Wiest starred in Edward Scissorhands. She worked with Woody Allen once again, in 1994, for Bullets Over Broadway, a comedy set in 1920s New York City, winning her second Best Supporting Actress Oscar for her portrayal of Helen Sinclair, a boozy, glamorous, and loud star of the stage.

On television, her performance on the series Road to Avonlea, in 1989, brought her her first Emmy Award, for Outstanding Guest Actress in a Drama Series. She received another nomination for her performance in the 1999 telefilm The Simple Life of Noah Dearborn, co-starring Sidney Poitier. She starred in the television mini-series The 10th Kingdom in 2000.

Wiest starred alongside Steve Carell and Juliette Binoche in Dan in Real Life (2007) and had a key supporting role in Charlie Kaufman’s 2008 film Synecdoche, New York.

In 2008, she appeared as Gabriel Byrne’s therapist, Gina Toll, on the HBO television series In Treatment, for which she received her second Emmy Award, for Outstanding Supporting Actress in a Drama Series. She received another nomination (in the same category) for the second season, in 2009, but did not win.

She starred alongside Nicole Kidman in Rabbit Hole (2010) which debuted at the Toronto International Film Festival.