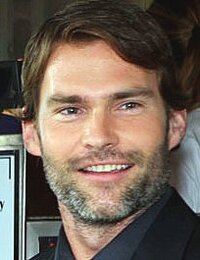 Hit Somebody
show all movies

Seann William Scott (born October 3, 1976) is an American actor and comedian. He is most widely known for playing Steve Stifler in the American Pie series of teen sex comedy films. He is also known for his roles in the films Final Destination, Road Trip, Dude, Where's My Car?, Evolution, The Rundown, The Dukes of Hazzard, Role Models, and Cop Out.

Scott’s first commercial success came with the 1999 movie American Pie as Steve Stifler, a role he reprised in two sequels, American Pie 2 and American Wedding. For his supporting role in the first film, Scott was reportedly paid $8,000. Though the character of “Steve Stifler” propelled Scott into the public consciousness, the actor has mentioned in a variety of interviews his fear of typecasting, which has led him to choose to play different types of characters post-American Pie such as hapless nerd role in the film Final Destination and a harmless stoner character in Dude, Where’s My Car? alongside Ashton Kutcher. He made an appearance in Kevin Smith’s Jay and Silent Bob Strike Back as a guitar-playing animal rights activist and has a starring part as a police officer in Southland Tales, where he re-unites with fellow actor Dwayne “The Rock” Johnson, with whom he’d previously worked in The Rundown. Scott hosted the MTV Movie Awards 2003 alongside Justin Timberlake. The two performed several skits, including scenes from The Matrix Reloaded, which are on The Matrix Reloaded DVD. He has also hosted Saturday Night Live and appeared as a guest co-host on Live with Regis and Kelly. He co-starred in Cop Out, Kevin Smith’s action comedy, alongside Bruce Willis and Tracy Morgan.