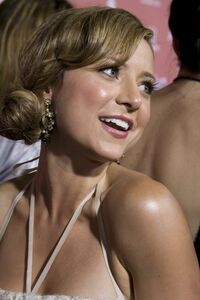 Christine Helen Lakin (born January 25, 1979) is an American actress. She is known for her role as Alicia "Al" Lambert on the 1990s ABC/CBS situation comedy Step by Step and as Joan of Arc in Showtime's Reefer Madness. She is currently the sidekick on Craig Kilborn's Fox talk show, The Kilborn File.

Christine Lakin got her start acting in commercials, before landing her first major role as Young Rose in the American Civil War drama The Rose and the Jackal. That movie aired in 1990, one year before she was cast as Al Lambert, the tomboyish daughter, on Step by Step.

After Step by Step was cancelled in 1998, she continued to appear in television movies, such as Showtime’s Reefer Madness and 2005’s Who’s Your Daddy?.

In 2006 she was a regular cast member in MTV’s Wild ‘n Out, an improv comedy show similar in structure to Whose Line Is It Anyway? She also appeared in commercial called “But He Has Bud Light” that aired during Super Bowl XLI, in which her male companion wants to pick up a hitchhiker who has Bud Light beer in one hand and an axe in the other.

In 2008 she starred alongside Paris Hilton in the movie The Hottie and the Nottie, requiring extensive makeup to make her appear ugly. The film met dismal reviews in the US. As of 2008, she also has several new films in either production or post-production.

In 2010 she became Craig Kilborn’s sidekick (his “Huckleberry Friend” – a reference to his “favorite movie”, Breakfast At Tiffany’s) on The Kilborn File on select Fox stations.