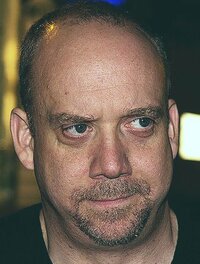 The Goon
show all movies

Paul Edward Valentine Giamatti (born June 6, 1967) is an American actor. Giamatti began his career as a supporting actor in several commercially successful and critically-acclaimed films produced during the 1990s including Private Parts, The Truman Show, Saving Private Ryan, The Negotiator, and Man on the Moon, before earning lead roles in several projects in the 2000s including American Splendor.

Giamatti’s first high profile role was in the film adaptation of Howard Stern’s Private Parts as Kenny “Pig Vomit” Rushton, Stern’s antagonistic program director at WNBC. Stern praised Giamatti’s performance often on his radio program, calling for him to be nominated for the Academy Award for Best Supporting Actor. He appeared in a number of supporting roles in big-budget movies such as The Truman Show, Saving Private Ryan, and The Negotiator (all 1998). In 1999, he played Bob Zmuda (and Tony Clifton) in the Andy Kaufman biopic, Man on the Moon. Giamatti continued to be featured in major studio releases such as Big Momma’s House (2000) with Martin Lawrence, the Planet of the Apes remake (2001), and in Big Fat Liar (2002) opposite Frankie Muniz and Amanda Bynes.

Giamatti began to earn critical acclaim after his lead role in the 2003 film American Splendor. He gained mainstream recognition and fame with the 2004 independent romantic comedy Sideways. His portrayal of a depressed writer vacationing in the Santa Barbara wine country garnered him a Golden Globe nomination and an Independent Spirit Award. Following the commercial success of Sideways, Giamatti appeared in Cinderella Man, for which he earned an Academy Award nomination for Best Supporting Actor. He was also nominated for a Golden Globe and won the Screen Actors Guild Award for Best Supporting Actor – Motion Picture.

In 2006, he was the lead in M. Night Shyamalan’s Lady in the Water, a supernatural thriller, followed by the animated film The Ant Bully, and Neil Burger’s drama The Illusionist co-starring Edward Norton. He also played Mr. Hertz in the action movie Shoot ‘Em Up and Santa Claus in the comedy Fred Claus. In 2008, he received his first Emmy Award for “Outstanding Lead Actor in a Miniseries or a Movie” for his title performance in the HBO miniseries John Adams, a role that also led to a Screen Actors Guild award. That same year, he starred in the independent film Pretty Bird which is a fictionalized retelling about the drama behind the invention of a rocketbelt.

He was nominated for 45 separate awards between 2001 and 2008, and won 26 of them, including both an Emmy and a Golden Globe for John Adams. All of his nominations except one were for American Splendor, Sideways, Cinderella Man, or John Adams; the exception was a Blockbuster Entertainment Award nomination for Big Momma’s House. The Brooklyn Academy of Music asked Giamatti, its “2007 BAM Cinema Club Chair”, to pick films for an eight-movie series called “Paul Giamatti Selects” and shown at the Academy in August and September 2007. His selections indicated a taste for paranoia and “the darkest of dark comedy,” according to a writer for The New York Times, and included Frenzy, Dr. Strangelove, Brewster McCloud, The Big Clock, The Seventh Victim, Dawn of the Dead (1978 version), Seconds, and Invasion of the Body Snatchers (1978 version).

Giamatti will play noted science fiction author Philip K. Dick in the semi-biopic The Owl in Daylight, which he is producing through his production company, Touchy Feely Productions. He is set for the lead role as Colonel Tom Parker in Bubba Nosferatu: Curse of the She-Vampires, which co-stars Ron Perlman, who recently replaced Bruce Campbell.