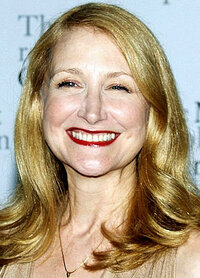 Patricia Davies Clarkson (born December 29, 1959) is an American actress. After having a dramatic education on the East Coast, Clarkson launched her acting career in 1985, and has worked steadily in both film and television.

Clarkson had supporting roles in a series of high-profile films in her early career. Her first movie role, at age 27, was as the wife of Elliot Ness (Kevin Costner) in The Untouchables. She was also featured in The Dead Pool, Rocket Gibraltar and Everybody’s All-American. She starred in the short-run television series Davis Rules, and in the miniseries Alex Haley’s Queen. More often a character actor than a leading woman, she has also appeared in such major films as The Green Mile (1999), Far from Heaven (2002), Good Night, and Good Luck (2005) and Lars and the Real Girl (2007). Her breakthrough role was in High Art (1998) where her portrayal of Greta, a German, drug-addicted lesbian former model, gained rave reviews.

In 2002, she originated her role as Sarah O’Connor (a.k.a. “Aunt Sarah”) in HBO’s Six Feet Under. She went on to win an Emmy for Outstanding Guest Actress that year for her performance, a feat she repeated for the same role in 2006.

In 2003, she gained critical acclaim and a Special Jury Prize for her work in four films that debuted at the Sundance Film Festival: All the Real Girls, The Baroness and the Pig, The Station Agent and Pieces of April. Later in the year, she was nominated for an Academy Award for Best Supporting Actress for Pieces of April, in which she plays an acerbic mother dying of cancer.

In 2006, she portrayed Sadie Burke, in All the King’s Men, set in her native New Orleans. In 2008, she had supporting roles in Elegy, as a womanizer’s put-upon girlfriend, and Woody Allen’s Vicky Cristina Barcelona as an unhappily-married housewife.

Clarkson returned to New Orleans for the January 17, 2009, reopening of the Mahalia Jackson Theatre for the Performing Arts. She served as Master of Ceremonies for a gala featuring Plácido Domingo in concert with the New Orleans Opera, conducted by Robert Lyall. She also made a cameo appearance in the Saturday Night Live Digital Short “Motherlover” on May 9, 2009. The video featured Andy Samberg, Justin Timberlake, and Susan Sarandon.

In 2010, she starred in Martin Scorsese’s Shutter Island. Clarkson was honored by the Jameson Dublin International Film Festival when she received one of the 2010 Volta awards for achievements in her career.

In response to the Deepwater Horizon oil spill, Clarkson published a post for Natural Resources Defense Council’s magazine OnEarth. She also released a public service announcement talking about her experiences growing up in New Orleans. Both pieces were released July 26, 2010.