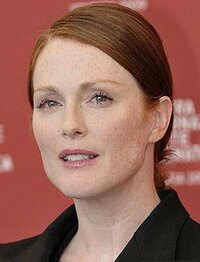 Julianne Moore (born December 3, 1960) is an American actress and a children's book author.

Moore moved to New York City in 1983, working as a waitress and performing in bit parts before being cast in the dual roles of Frannie Hughes and Sabrina Hughes on the soap opera As the World Turns, for which she won a Daytime Emmy Award; she played the roles from 1985 to 1988. In 1987, she was part of the junior company in the New York premiere of Caryl Churchill’s Serous Money at The Public Theater. Because of Screen Actors Guild rules, she had to change her name, since there were already actresses named “Julie Smith” and “Julianne Smith”. She chose her father’s middle name, “Moore”, but because there was already another actress named “Julie Moore”, she finally settled on “Julianne Moore.”

Moore began starring in feature films in the early 1990s, mostly appearing in supporting roles in films like The Hand That Rocks the Cradle, Benny & Joon, and The Fugitive. Her part in 1993’s Short Cuts gained her critical acclaim and recognition, and she was cast in several high-profile Hollywood films, including 1995’s romantic comedy Nine Months, and 1997’s summer blockbuster The Lost World: Jurassic Park. Her first role as the central lead, Carol White, in the well-reviewed independent film Safe also attracted critical attention. The role was called the ancestor of one of Moore’s best-praised roles, Cathy Whitaker, in another Todd Haynes film, Far from Heaven. Critics noted the importance of this role in establishing her as an actress to take seriously. In addition, her performance on Vanya on 42nd Street, a filmed version of Chekhov’s play, earned her critical recognition as being more than just a “blockbuster film” actress, with film critic Kenneth Turan calling her work in the film “a revelation”. For this role, Moore won “Best Actress” from the Boston Society of Film Critics.

In November 2006, Moore made her Broadway debut in the world premiere of David Hare’s new play The Vertical Hour, directed by Sam Mendes. 2006 also saw the releasing of three of her films: Freedomland, which opened in February to mixed reviews, followed by Trust the Man, directed by her husband Bart Freundlich, and the critically acclaimed science fiction feature Children of Men. The following year she appeared opposite Nicolas Cage and Jessica Biel in Next, a science fiction action film based on The Golden Man, a short story by Philip K. Dick; and the controversial incest film Savage Grace, the story of a high-society mother and son whose Oedipal relationship ends in tragedy. In 2008, she starred alongside Mark Ruffalo in Blindness, a thriller from director Fernando Meirelles.

The next year Moore appeared opposite Colin Firth in the well-received American drama A Single Man. When the cancellation of As the World Turns was announced in late 2009, Moore decided to honor the soap that brought her fame and temporarily returned for a few days as Frannie Hughes, to which fans responded with great admiration. During the 2009–2010 season of 30 Rock, she had a guest role as Nancy Donovan, a love interest for Alec Baldwin’s character.