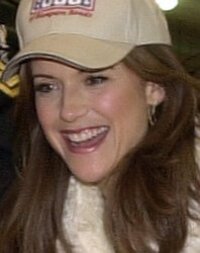 While living in Australia, Preston was discovered at 16 by a fashion photographer who helped her get work in commercials and other small parts, which eventually developed into a successful movie career. Her first prominent role in a film came as “popular girl” in 1985’s Secret Admirer opposite C. Thomas Howell, followed by a topless nude scene in Mischief that same year.

She played the girlfriend of her husband, John Travolta’s, character “Terl” in the 2000 film Battlefield Earth, and received “Worst Supporting Actress” at the 21st Golden Raspberry Awards for her role in the film.

Preston was featured in the chart-topping Maroon 5 music video, “She Will Be Loved” in 2004. The video features a love triangle and romantic scenes between Preston and Maroon 5 frontman Adam Levine. In 2008, she was cast in a television pilot for a potential show called Suburban Shootout. She had a short term recurring role on Medium.

She is a spokeswoman for Neutrogena since 2005 and appears in print and television ads.