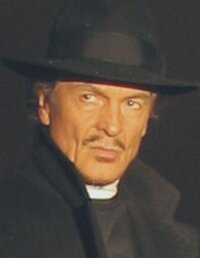 Ulli Lommel was born in 1944 in Zielenzig, Oststernberg, Germany (now Sulecin, Lubuskie, Poland). He began his performing career when he was put on stage in 1948 at the age of four by his father, Ludwig Manfred Lommel, a popular comedian and radio personality often referred to as the Charlie Chaplin of Germany. The younger Lommel decided as a teenager that he wanted to pursue acting, but his father did not approve, so he ran away from home at age 16.

He acted in over 28 plays, among them Shakespeare’s “Hamlet”, in which he played the lead, 22 TV movies and 18 Motion picture|motion pictures before joining Rainer Werner Fassbinderand the Anti-Theater, an inspired theater collective that launched the careers of several prominent German actors including Lommel, Kurt Raab, Hanna Schygulla and Margit Carstensen.

As Fassbinder moved from theater to films in the 1970s, rapidly becoming one of the leading voices of the German New Wave, Lommel became one of his closest collaborators. He spent 10 years working with Fassbinder, who was legendary for his prodigious output, directing 41 films in 13 years. Lommel not only acted in 16 Fassbinder productions, he also served as producer, assistant director and production designer, including Satan’s Brew, Love Is Colder Than Death, Effi Briest and Chinese Roulette. Since the death of Fassbinder in 1982, Lommel has been traveling the world and participating in numerous retrospectives dedicated to his Fassbinder years, among them Museum of Modern Art|the Museum of Modern Art in N.Y., Harvard, the Louvre, London and and Beijing.

In 1971, Lommel directed his first movie, Haytabo, starring Eddie Constantine. In 1973 Fassbinder produced The Tenderness of the Wolves, Lommel’s cult classic, a film that was voted “One of the 1,000 movies to change your life” by Time Out. The film opened the Berlin International Film Festival and played for several years in art houses around the world.

In 1978 Lommel moved to New York City, where he began working with Andy Warhol and made two films with Warhol, Blank Generation and Cocaine Cowboys. In 1980 Lommel moved to Hollywood and made The Boogeyman, starring John Carradine, which became an over night sensation and box office hit, grossing over $25 million worldwide.

In 2004 Lommel started his own repertory group in Venice, California, where he and his collaborators have made 16 genre films release by Lions Gate Films, most of them highly commercial U.S. Home Theatre Premieres.

In 2008 Lommel teamed up with David Carradine who stars in Lommel’s intense drama about good and evil entitled Absolute Evil.