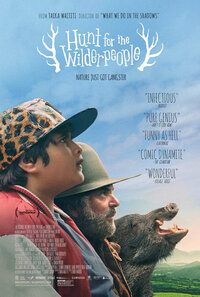 Hunt for the Wilderpeople

"Hunt for the Wilderpeople" is a New Zealand adventure-comedy from 2016 about a boy who is brought to foster parents at a remote farm and gets lost with his foster father in the wilderness. The movie has been written and directed by Taika Waititi, the leading roles are played by the young Julian Dennison and veteran actor Sam Neill.

12-year-old Ricky (Julian Dennison) is brought to a remote farm by child welfare officer Paula (Rachel House). Here lives the resolute but warm-hearted Bella (Rima Te Wiata) with the reclusive and grumpy Hector (Sam Neill). They are the last chance for Ricky who has been abandoned by his mother. The first thing Bella does, is making fun of Ricky’s overweight and already in the first night Ricky tries to run away. But as often as he tries to leave, he never gets far in the wilderness that surrounds the farm. After a while he starts to like Bella, and Ricky and Hector are at least getting used to each other. Ricky feels like home.

But suddenly and totally unexpectedly Bella dies. Hector, completely devastated, neither can nor want to keep Ricky at the farm and calls child welfare to pick up the boy. This time Ricky runs away for good and it takes a while for Hector to find him. They are in the middle of the wilderness, far away from home, when Hector breaks his leg. The couple is forced to stay in the bush for weeks, while child welfare officer Paula starts a large search operation, convinced that Hector has abducted Ricky.

When Hector finally is able to walk again, they meet a couple of hunters. Since the whole country knows about the missing boy, the hunters are aware of what they just found. But when Ricky tries to explain what really happened to them, he expresses himself in a way, that the hunters think Hector has sexually abused him. They all get into a quarrel and Ricky and Hector flee. Now they both don’t have a reason to be found anymore. Ricky does not want to go to an orphanage and Hector, as Ricky learns, has a criminal record and does not think that anybody would believe him. They stray through the wilderness while the search party gets bigger…