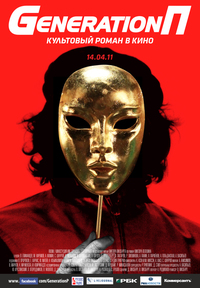 Generation P (Russian: Generation "П") is the first feature-length screen adaptation of the eponymous novel by the Russian author Victor Pelevin. It is a chronicle of Russia's transition from communism to capitalism.

Like the novel, the film has a complex structure and many intertwined storylines. During work on the film, the plot was subjected to a major reworking: in contrast to the novel, the story of which ends at the end of the 1990s, the film is brought into the present day and even extended slightly into the future. The film is also in many respects built on hallucinations, including a speech by Che Guevara concerning how and why television is destroying humankind. The film follows Babylen Tatarsky as he struggles to work and adapt to life in Moscow in the newly independent Russia. Babylen is a very skilled writer of advertisements, and so he begins working in an advertising agency which promotes Western brands, adapting their advertising campaigns to the “Russian mentality.”