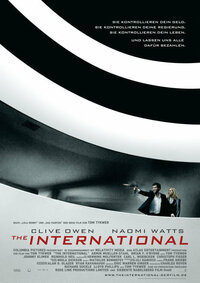 "The International" has great character development, wonderful filmography, and a plot that is not only "believable" but "accurate" in its implications. The critics who suggest the plot is not part of the "real world" have lived sheltered and idealistic lives. This viewer rates the film as 4-1/2 stars out of 5.

OPINION—A “great” movie in many ways.

Enlightening plot, which is, regrettably, easily believable at the conclusion of the run of film credits, not just the action. International intrigue, manipulation of money flows, nurturing disruption and revolution, weapons “deals,” assassinations, control of individual destinies and the fall of governments by the cloaked tentacles of multinational banks… and the stark lesson that international financial institutions exert their nefarious unlimited influence of nations and insurrectionist groups by facilitating local wars (small and large) through financing the costs of warring for the adversaries on both sides… and then leveraging the debt created to influence all aspects of life… and continue to encourage additional easy debt and tough leverage.

True, there were a couple of scenes (one with Salinger with Whitman, the other with Salinger with Wexler) where the dialog was a bit heavy with philosophical quips, all accurate but too much at one speaking. However, some of the critics who parrotted the NYT’s criticism of inadequate character development likely also believe other biased declarations by that gray Grey Lady. And, one of the reviewers who claimed “often incomprehensible in real world terms” has apparently never been in business, never travelled internationally in the business world and never left his (or her) apartment. Subtle parts of this film’s complexity are easy to miss if one sits through only one screening… and is busy texting while at it. If someone without the personal involvement and experience wants to learn about the “real world” at this level of business, The International must be viewed and heard several times with focus and no interruptions.

Visually in its filming and location settings, it’s superb. Milan, Berlin, Volkswagen HQ building in Wolfsburg, Germany, NYC and Istanbul are key highlights as background and foreground. More than 15 international locations confirm the “internationality” of The International. The film’s most mysterious scene (a genuine “WTFH” moment) was shot from helicopter over and along a stretch of the coast road of Lake Garda, Italy. Sensational vistas along with the mystery, never answered except for one essential certainty.

Wonderful acting created believable varied characters and behaviors. Clive Owen (as Louis Salinger) is the driven and principled lead, who ultimately is forced to doubt whether his future principled objectives, after the film story ends, can be achieved. Learned his skills and fears as a former Interpol agent. Complex, troubled; you want him to be your friend.

Ulrich Thomsen as the bank’s CEO, Jonas Skarssen, is the character you love to despise. He has no principles of humanity, only of currency flows and the power it gives him, regardless of the deaths he causes. His only personal relationship first appears to live with his young son; but that is quickly revealed as a dynastic attempt to educate, train and create a replication of his evil persona.

Naomi Watts’ role is Eleanor Whitman, a NY department of law enforcement agent working with Salinger to reveal and incriminate the bank, contra Salinger’s objective to bring down the bank. She is oppressed and stymied by the bureaucratic egos of entrenched law enforcement chiefs in the US, Germany and Italy, whose primary interests are their own bureaucratic survival, power and (in Italy) the wealth that accrues from corrupt dealings.

Brian O’Byrne is “The Consultant,” the bank’s assassin. Cold and unprincipled, he misleads the audience at his first face-to-face with Salinger, when he warns Salinger about the bank: “They will never let you take me in.” The audience doesn’t have a clue.

Felix Solis (Detective Iggy Ornelas) and Jack McGee (Detective Bernie Ward) are wonderful in their roles as NYC Police partners of many years. Absolutely believable and “lovable” as characters you hope will go on to long careers together. Their ease at becoming a trio with Salinger reflects everything civilians hope their own local law enforcement cops can be.

Tibor Feldman is the quirky and nervous Dr. Isaacson, who wants NO visits from law enforcement. He is one of those “only in New York City” personalities. His contribution is providing a key link to identifying The Consultant and great comic relief when he begs Salinger, Ornelas and Ward at his front door, “I’m an orthopedist. Why would anyone want to kill an orthopedist???”

An unforgettable character is the boisterous, corrupt and murderous Carabinieri Captain played beautifully as the film’s most ugly character by Luigi Di Fiore. From his first step on the screen, we know “this is not someone we want dating our daughter.”

Luca Barbareschi is as suave as one gets as an international munitions firm owner, CEO and head of the Calvini family, seeking political office. Cool and realistic, he projects the same sophisticated style of a leading man of business power and influence, with a different interest, as did Cary Grant in That Touch of Mink. (What a contrast in stories.)

Haluk Bilginer as the Istanbul-based international high-tech weapons company CEO Ahmet Sunay exudes the pleasant professional business personality that allows him to sell arms to both Israel and its enemies and all other governments and NGOs at war. He plays “such a dangerous game,” because it has generated his mushrooming fortune over the years. Pure business: “our relationship will be based on mutual interest, not trust.”

Patrick Baladi as the bank board’s chief attorney, Martin White, skillfully projects (by word, body language and facial expression) everything everyone in the world dislikes about the stereotypical dislikable “lawyer.” “Smarmy liar” is the short, somewhat redundant description, but Baladi does it perfectly. Disgustingly pleasant enough to ALMOST miss him when he disappears from the screen.

Franco Trevisi is one of the subtleties in the film as a key player, even with only two or three very brief appearances, only one speaking. One Internet movie site calls the character role he plays an “Italian Gentleman.” Absolutely erroneous as the role he plays, and wholly inadequate in his character’s importance. Follow his suit jacket; the dark pinstripe; his extended arm. The Calvinis (father and sons) depend on him unreservedly. (And contrary to one review that confusedly credited, or discredited, Salinger for “shooting and wounding Skarssen,” here’s your man… or “gentleman.”)

Over the line anywhere? Definitely. The shoot-em-up inside the impressively constructed and filmed Guggenheim set was not believable in its length and volume of flying lead and jacketed ammo. Some clever and some poignant (between Salinger and The Consultant) moments while havoc reigned, but WAAAAYYYY too long (where the hell were the NYC cops for such a long time before finally arriving?), and the disconnection, fall and shattering of the skylight-height metal structure was not believable.

Short on detail? One scene, in his boss’ apartment, in which Salinger yanks out of the wall and smashes apart the landline telephone, on the belief both his boss’ and his phones have been bugged. True to his prescience, Salinger pulls a tiny chip with two short wires out of the shattered remains of the phone, holds the “device” up to his boss, and both realize their discussions have been compromised. In this era of satellites, computer hacking of even the latest refrigerators, infiltrating phone company buildings or remote terminal boxes, asking the audience to understand and believe this tiny device is a “telephone bug” without some comment by Salinger, such as “GSM bug” or some other genuine term, presents it a “made-up” prop, necessary only to add to the plot, but not part of the real world. The bug needed a “real world” name.

Want a great film with lots of character development, great filmography, a thrilling story and an education about “the real world,” then run The International, several times, and watch and listen to ALL that happens.