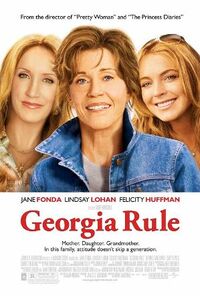 Rebellious, devious, gorgeous teenager Rachel Wilcox (Lindsay Lohan) screams, swears, has sex, takes drugs, steals, and drinks; she is, in a word, uncontrollable. With her latest car crash, Rachel has broken the final rule in her mother, Lilly’s (Felicity Huffman), San Francisco home. With nowhere else to take the impulsive and rambunctious girl, Lilly hauls her daughter to the one place to which she had sworn she would never return: her own mother’s house in Idaho. Matriarch Georgia Randall (Jane Fonda) lives her life by a number of unbreakable rules – God comes first and hard work comes a very close second – and wants anyone who shares her home do the same. She will make anyone who takes the Lord’s name in vain wash out their mouths with a bar of soap. Now saddled with raising the young woman, it will require each patient breath she takes to understand Rachel’s fury.

Georgia arranges a job for Rachel as the office girl of Dr. Simon Ward (Dermot Mulroney), the local veterinarian, who also unofficially treats people. His two nephews, Sam (Dylan McLaughlin) and Ethan (Zachary Gordon), are often at Georgia’s house. Simon does not show interest in Rachel or other women, so she thinks he is gay. However, Simon’s sister, Paula (Laurie Metcalf), reveals that he is still mourning the death of his wife and son who were killed in a car crash three years earlier. He refuses to have sex with Rachel even when she tries to seduce him, but feels some passion for Lilly, whom he has dated in the past.

Rachel performs oral sex on Harlan Wilson (Garrett Hedlund), who, not yet being married, was still a virgin because of his LDS (Mormon) religion. Backed up by a reluctant Rachel, he confesses to his LDS girlfriend, who is shocked. A team of LDS girls starts spying on Harlan to make sure he does not “have sex” again. After a short chase using Harlan’s truck, Rachel explains to them that what happened was over, and that they can go back to having their summer fun. They agree to do so, only if Rachel goes home. Rachel then threatens them by saying if they have anything to do with her and Harlan again, as in: talk to Harlan, yell at Harlan, call her a name, throw stuff at her, or do anything else that has to do with her, then she will find all of their boyfriends and “fuck them stupid.”

While trying to make a point to Simon about survival, Rachel bluntly says that her stepfather Arnold (Cary Elwes) sexually molested and raped her from the time she was 12 until she turned 14. Seeing the effect of her revelation, Rachel tries to convince him she lied. However, Simon has already told Georgia about the abuse, and Georgia in turn tells Lilly, who at first thinks Rachel is lying. Lilly comes to believe her daughter, however, and begins to drink heavily and asks Arnold for a divorce. When Arnold arrives, Georgia tells him to leave and will not allow him in the house. Finally, she attempts to force him off the property by hitting him with a baseball bat; when he still refuses to leave, she forces him, by using the bat to threaten his sports car in order to put a bar of soap in his mouth, after he takes God’s name in vain. Rachel sees that Lilly cannot accept the truth, and lies to her, saying she was not molested by Arnold.

At the motel where Arnold is staying, Rachel tells him that she has a video tape of him having sex with her when she was 14. Arnold seems worried, which further convinces the viewers of his guilt. Rachel demands US$10 million (half his presumed net worth) if he does not keep Lilly happy. She admits to him that she lied to Lilly because she does not want her to be upset anymore. On the way back to San Francisco, Arnold tells Lilly that he is giving Rachel his new red Ferrari, and Lilly realizes that he is guilty. As Lilly jumps out of the car and starts walking back to town, Arnold angrily admits to having raped and molested Rachel; he claims to have been seduced, that Lilly’s heavy drinking drove him to it, and finally saying that Rachel enjoyed it. After fending off an attack from an enraged Lilly, Arnold drives off, daring her to take him to court.

In the end, Georgia, along with Simon, Rachel, and Harlan, catch up with Lilly in Harlan’s pick-up truck, and a tearful Rachel makes up for her behavior. Harlan also mentions to Georgia that he is in love with Rachel and plans to marry her when he returns from his two-year mission.