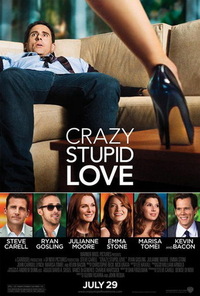 Cal Weaver (Steve Carell) is living the dream – he’s got a good job, nice house, and great kids. Cal gets the surprise of his life when he learns his wife Emily (Julianne Moore) wants a divorce. His “perfect” life quickly unravels. In today’s single world, Cal, who hasn’t dated in decades, stands out as Mr. UN-smooth. Spending his free evenings sulking at a local bar, Cal is taken on as a “wingman” to handsome, by thirty something player Jacob Palmer (Ryan Gosling). In an effort to help Cal start living his life again, Jacob opens Cal’s eyes to the many options before him: flirty women, manly drinks and a sense of style. They aren’t the only ones looking for love in what might be all the wrong places: Cal’s 13-year-old son is crazy about his 17-year-old babysitter, Jessica (Analeigh Tipton) who harbors a crush on Cal. And despite Cal’s makeover, the one thing that can’t be made over is his heart, which seems to keep leading him back to where he began.