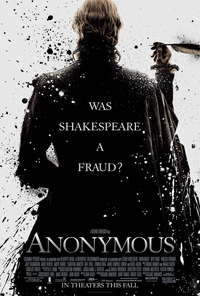 Anonymous is an upcoming historical thriller directed by Roland Emmerich. It stars Rhys Ifans and Vanessa Redgrave. It will be released theatrically in the United States on 30 September 2011. It is produced by Centropolis Entertainment and Studio Babelsberg, and distributed by Columbia Pictures.

Anonymous is a political thriller which also involves the question of who actually wrote the plays of William Shakespeare. It follows Edward de Vere, 17th Earl of Oxford (Rhys Ifans), and is set against the backdrop of the succession of Queen Elizabeth I (Vanessa Redgrave) and the Essex Rebellion against her.

It’s an historical thriller because it’s about who will succeed Queen Elizabeth and the struggle of the people who want to have a hand in it. It’s the Tudors on one side and the Cecils on the other, and in between [the two] is the Queen. Through that story we tell how the plays written by the Earl of Oxford ended up labelled ‘William Shakespeare.’ and:

[F]or me there was an incredible script that I bought eight years ago. It was [initially] called Soul of the Age which pretty much is the heart of the movie still. It’s three characters. It’s like Ben Jonson, who was a playwright then. William Shakespeare who was an actor. It’s like the 17th Earl of Oxford who is the true author of all these plays. We see how, through these three people, it happens that all of these plays get credited to Shakespeare. I kind of found it as too much like Amadeus to me. It was about jealousy, about genius against end, so I proposed to make this a movie about political things, which is about succession. Succession, the monarchy, was absolute monarchy, and the most important political thing was who would be the next King. Then we incorporated that idea into that story line. It has all the elements of a Shakespeare play. It’s about Kings, Queens, and Princes. It’s about illegitimate children, it’s about incest, it’s about all of these elements which Shakespeare plays have. And it’s overall a tragedy. That was the way and I’m really excited to make this movie. The film not only makes the case for the unorthodox Oxfordian theory — that Edward de Vere, the 17th Earl of Oxford wrote Shakespeare’s works. It also espouses the extremely fringe Prince Tudor theory as well — that de Vere was the illegitimate son of Queen Elizabeth I. In the most extreme variants of the Prince Tudor theory, Edward de Vere became the queen’s lover as an adult, thus siring his own brother/son, Henry Wriothesley, the 3rd Earl of Southampton, who is believed to be the “Fair Youth of the Sonnets” and the sonnets’ dedicatee. This is depicted in Anonymous.