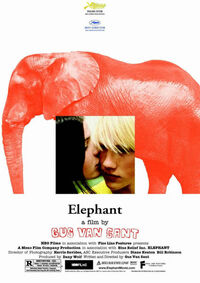 Elephant is a Gus Van Sant film depicting the story of a high school just before and after a massive shooting. The film is shot in a way that makes the viewer seem like they are there, in the high school, slowly walking around witnessing ever characters story unfold. The film won the Palme d’Or and Best Director at the 2003 Cannes Film Festival.