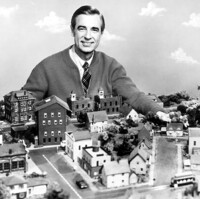 The first episode of Mister Rogers' aired on NET in Canada as MisteRogers. The show starred and was created by Fred Rogers who would greet his children audience every time smiling and singing a song as he took his pullover and shoes off before his trolley car friend took him on a learning adventure.