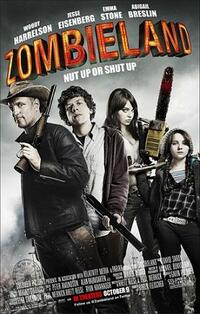 Zombieland is a 2009 American zombie comedy film directed by Ruben Fleischer from a screenplay written by Rhett Reese and Paul Wernick. The film stars Jesse Eisenberg, Woody Harrelson, Emma Stone, and Abigail Breslin as survivors of a zombie apocalypse. Together they take an extended road trip in an attempt to find a sanctuary free from zombies.

The film is set in a post-apocalyptic America, two months after a mutated strain of mad cow disease turns nearly all humans into zombies. College student “Columbus” (Jesse Eisenberg) is on his way to Columbus, Ohio to see if his parents are still alive. He loses his car in an accident and encounters “Tallahassee” (Woody Harrelson), who is on a quest to find the last Twinkies on Earth. They travel together and when they stop at a grocery store, they meet two sisters, “Wichita” (Emma Stone) and “Little Rock” (Abigail Breslin). The sisters con them into handing over their weapons and steal their vehicle. Later, the two men find another truck loaded with weapons, but when they meet the girls again, the girls attempt once more to steal their truck. Columbus proposes a truce and suggests they travel together.

The group decides to travel to “Pacific Playland”, a Los Angeles amusement park rumored to be zombie-free. Columbus disagrees at first, but when Wichita informs him that Columbus, Ohio has been destroyed, he decides to stay with the group, having nowhere else to go. Along the way, they pass through Hollywood and Tallahassee decides to take them to Bill Murray’s mansion. Tallahassee and Wichita meet Murray himself, uninfected but disguised as a zombie so that he can walk safely among the infected and play golf without being bothered. When Murray attempts to scare Columbus and Little Rock as a practical joke, Columbus shoots and kills him, believing him to be a real zombie. Later, Columbus realizes Tallahassee has been grieving for his young son, lost to the zombies, rather than his dog as he had earlier led Columbus to believe. Wichita begins developing feelings for Columbus, and the two nearly kiss; fearing attachment, she leaves with Little Rock for Pacific Playland. Columbus decides to go after Wichita, and he and Tallahassee, who initially refuses, pursue the sisters in one of Murray’s vehicles.

Wichita and Little Rock arrive at Pacific Playland and turn on all the rides and lights, attracting nearby zombies. A battle ensues, leaving the sisters trapped on a drop tower ride and running low on ammunition. Tallahassee and Columbus arrive just as the sisters’ ammunition is depleted. Tallahassee manages to lure the majority away, then intentionally locks himself in a game booth while Columbus goes after the sisters. Columbus saves the girls and in thanks, Wichita reveals her real name to him, Krista. The two share their first kiss. Tallahassee eliminates the remaining zombies single-handedly and gets a Twinkie that Little Rock had acquired. Columbus comes to the realization that this is the only family he needs, and the four leave Pacific Playland together.