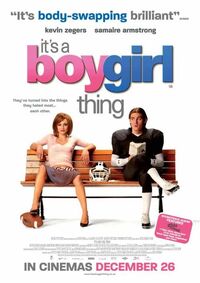 It's a Boy Girl Thing

It's A Boy Girl Thing is a 2006 romantic comedy film starring Samaire Armstrong and Kevin Zegers, set in the United States but produced in the United Kingdom. The film is directed by Nick Hurran and written by Geoff Deane.

Woody and Nell are neighbors who go to the same high school, but are otherwise completely different. Woody is a popular sex-crazed varsity football player while Nell is a nerdy, poetry-loving girl. They loath each other and are constantly in dispute. One day their class goes on a school trip to a museum and are forced to work together on an assignment. They quickly begin arguing in front of a statue of the ancient Aztec god Tezcatlipoca. As they argue, the statue casts a spell upon them — causing them to wake up in each other’s bodies the next morning. When they arrive at school, they immediately blame each other for the body swap but agree to pretend to be the other person until they can find a way to switch back. At first, they seem to succeed but quickly go back to arguing when they each feel the other is misrepresenting them in school.

After spending so much time together, Nell and Woody become very fond of each other and start to understand each other better. The night before the interview and the game, they agree to go to the Homecoming Dance together, as “not a date.” The day of the interview and match, Woody went to Yale for the interview and at first messed things up and was asked to leave, but he started to talk about poetry in rap, which impressed and astonished the interviewer. After that, he went to the match and watched Nell run in the winning touchdown in the closing seconds. After the match, they congratulate each other for their successes. After this, they return to their own bodies. The scene finished with Woody being kissed by Breanna and Nell going home very upset about it.

The following day, Woody tries to talk to Nell but is stopped by her mother, who sees Woody’s family as losers and “low class.” Nell receives a letter from Yale informing her that she has been accepted to Yale, meaning that her interview (done by Woody in her body) was successful. However, she is still upset with Woody and has decided not to go to the Homecoming Dance. Meanwhile, Nell’s father has a talk with her on the porch about Woody, during which she confesses she truly likes him, and her father surprises her with a dress and shoes for the dance. At the dance, Woody sees Nell and they leave the school together and share a kiss near their houses. The following day, Nell tells her mother that she is taking a year’s sabbatical from Yale, and hops into Woody’s car. The film ends with the happy couple driving off down the road.