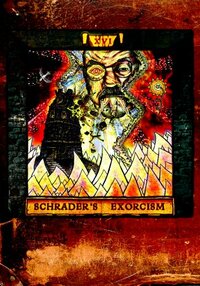 Iconic director Paul Schrader is fired from Prequel to the Exorcist by Morgan Creek,2 years later he ressurects the movie and gets a theatrical release thru W.B.,This story is told from the ditches of editing the movie in it's prep for a film festival in europe.The rest is truly film history.

Paul Schrader a maverick in the film industry gets fired off a movie he directed Dominion prequel to the Exorcist.This is the story of how he came back and worked in the ditches with other filmakers to get his movie released by W.B. in 2005.Relentless and shot from the hip this documentary means bussiness,you see real people figuring out real problems and getting it done.Schrader is astonishing as is Stellan Skarsgard and all the other actors and crew who are interviewed and perfectly placed in this dynamic pic.